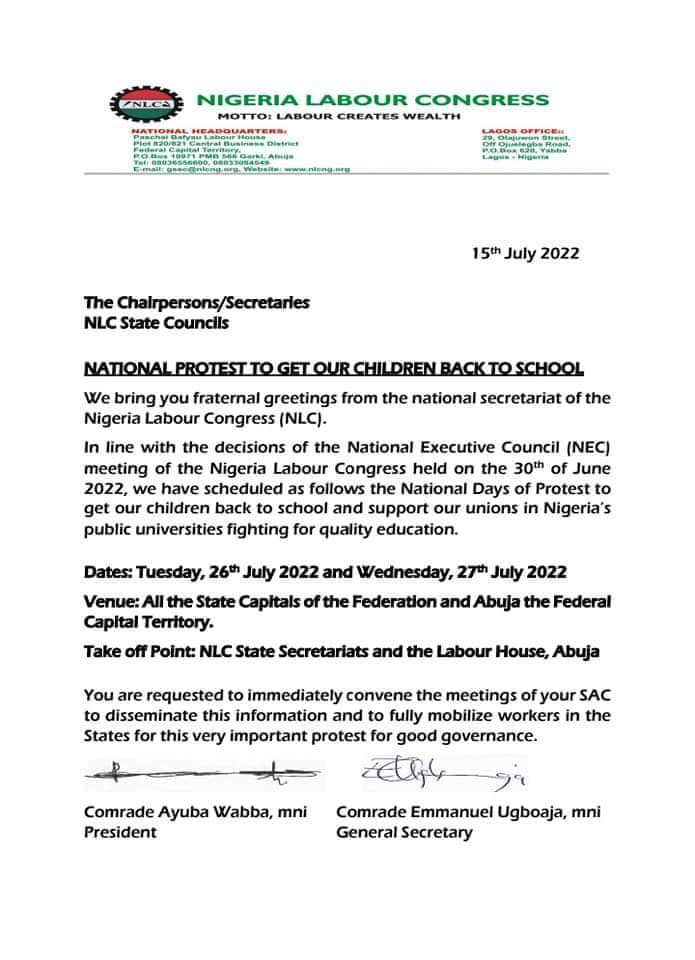 The Nigeria Labour Congress has announced plans to commence a two-day nationwide protest on Tuesday, July 26, 2022, in solidarity with the ongoing strike action by the Academic Staff Union of Universities.

This was made known in a letter signed by the NLC Chairman, Ayuba Wabba on Friday.

The circular signed by the National President of the congress, Ayuba Wabba, partly read, “We bring you fraternal greetings from the national secretariat of the NLC.

“In line with the decisions of the National Executive Council meeting of the NLC held on June 30, 2022, we have scheduled as follows the National Days of Protest to get our children back to school and support our unions in Nigeria’s public universities fighting for quality education.”

According to the circular, the protest would be held on “Tuesday, July 26, 2022, and Wednesday, July 27, 2022, in all the states of the Federation and Abuja, the Federal Capital Territory.

“Take-off point is the NLC State Secretariats and the Labour House, Abuja. You are requested to immediately convene the meetings of your SAC to disseminate this information and to fully mobilise workers in the states for this very important protest for good governance,” it added.

ASUU embarked on a nationwide strike on Monday, February 14, 2022.