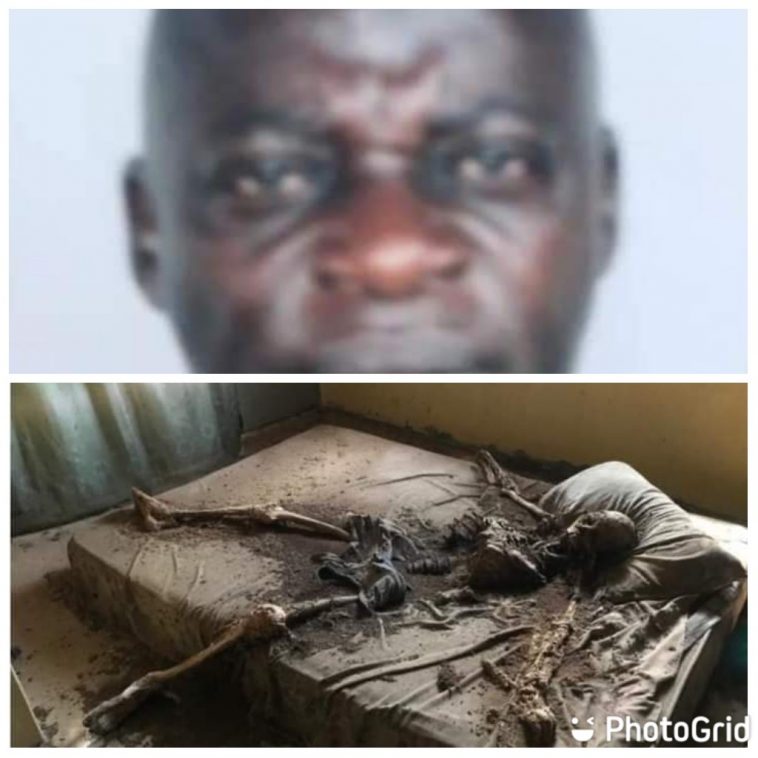 The Adeosun/Idi Orogbo Community in Ido Local Government Area of Oyo State was thrown into shock on Sunday when they found one of their landlords, Mr John Aderemi Abiola, in his room, almost four years after he was last seen in December 2018.

The discovery was made after the community decided, with the approval of the police authorities, to go into his compound to clear the bush in his compound which had overgrown his fence into the next house, causing invasion by reptiles.

As 2019 crept into 2020, the residents started wondering where the man could be. Though he told about two of those he used to communicate with of his intention to go to Port Harcourt, Rivers State, and be back for Ileya ceremony in 2018, not seeing him for the festivity and thereafter made them to think he was staying back where he initially came from.

Calls to his phone lines were not going through other. After it was noticed that the weeds in his compound had grown bushy, the community landlords were said to have decided in a meeting to find a means of getting access to the premises to clear the bush.
However, they were said to have jettisoned the idea because of the implication in the law.

From then to 2021, till 2022 is getting to the end, the residents of the community who did not know his whereabouts decided again to go and clear the bush.

Nigerian Tribune learnt the move was made again when the owner of the piece of land beside Mr Abiola’s house moved in about two years ago after completion of the construction.

But the invasion of his residence by snakes crawling in from the next compound got him worried about the safety of his family members.

This was said to have made the community to approach Apete police station again, where they were given the nod to do the necessary.

So, on Sunday, the community decided to hire labourers to clear the bush. The house was constructed on the backside of the piece of land while the front side had a thick bush that could not be accessed.

As the labourers got there with some landlords and started the work, they first noticed Mr Abiola’s Volkswagen Golf car with registration number AKD 769 DC which had been covered by the bush before the clearing.

As the building came in view, it was noticed that the window of Mr Abiola’s room was open, which prompted curiosity.

One of the landlords, Mr Mohammed Ademola, who also worked for and used to interact with Mr Abiola, decided to check what was in the room.

He was however shocked when he saw the skeleton on the bed of the house owner. Mr Ademola raised the alarm which made others to race to the window.

They were all shocked and the news quickly spread. It was learnt that the Divisional Police Officer in charge of Apete, SP Grace Akinsehinwa, was promptly informed, which made her to send detectives to the scene for investigation and action.

On Wednesday, while Nigerian Tribune was at the scene to investigate the incident, police detectives, as well as officials of Nigeria Security and Civil Defence Corps (NSCDC) and the Ministry of Environment arrived, probably with a plan to evacuate the remains. It was evident from his skull and exposed teeth that he was gaptoothed in front. Also, his boxers could still be seen around his waist while the top he must have worn had been eaten by his rotten flesh.

Only a tiny piece remained by his side. Also found with his phones was his laptop.

His plasma TV was still hanging on the wall and his wardrobe still had his clothing and other items. Mr Abiola, whose date of birth was discovered to be October 1, 1955, reportedly moved into the house in July 2017, but was not in close relationship with other residents except formal greetings whenever their paths crossed.

Known as an engineer who was based in Port Harcourt, Rivers State, with his family before moving to Ibadan, he was said to have lived in a couple of areas within the city before constructing the house in Adeosun Community.

He was also known for his frequent travels to Port Harcourt to do his engineering work whenever the need arose.

“But we noticed that he didn’t associate with others and he came to landlords’ meeting just once. His house has a high fence and was constructed at the back with big space in front to the gate.