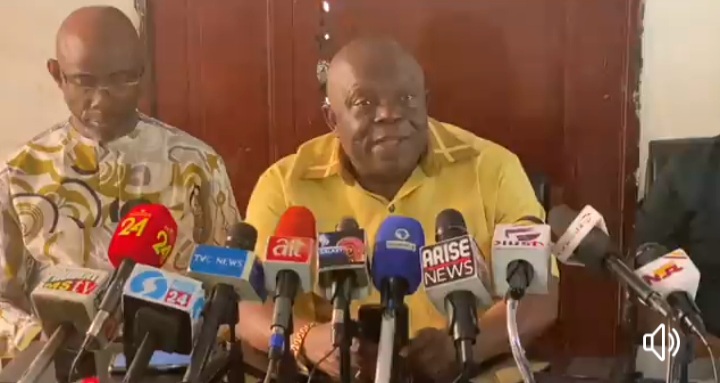 Imo State Government has accused the candidate of PDP for Ideato Federal Constituency and the Coalition of United Political Parties (CUPP), Ikenga Imo Ugochinyere of hacking into the Server of the Independent National Electoral Commission (INEC), doctoring the details and using same for the campaign of calumny against the governor and government of Imo State.

This claim was made by the state Commissioner for Information, Declan Emelumba during a press conference at the Government House, Owerri on Friday, in reaction to a viral claim by Ugochinyere that Governor Hope Uzodimma connived with officials of INEC to inflate the voters’ register of his Omuma Ward with fictitious names and details.

He said, “It becomes curious to ask, how did Ugochinyere get the document, from where he was indicting His Excellency, Distinguished Senator Hope Uzodimma on his Omuma Ward. We are left to conclude that he must have hacked into the INEC saver, and has hacked into it, he doctored the documents and decided to brandish them to tarnish the image of the governor and government of Imo State”.

Emelumba said the government would have ignored the alarmist because his character is defined by recklessness, irresponsibility and seditious outbursts, but it considered that would be wrong because it would amount to condoning the criminality of such actions.

“This is why we deem it necessary now to call on relevant security agency to immediately apprehend the said Ugochinyere, to find out from him, where and how he got the documents and figures he was brandishing before the public.

He said INEC had in a recent statement, disclosed that it was still verifying the names entered in the voter’s register, even as it has concluded the biometric verification of some states in which they made public the fictitious, invalid and double registrants and subsequently expunged the names from their register, adding that Imo was not among the states in the list, as that of the state has not been concluded.

The Commissioner refuted other claims made by Ugochinyere about the figure of registration in the governor’s Omuma Ward Fu ring in past elections.

He wondered why after the alleged verification of how voters registration went in the twenty two states controlled by APC by the Conference of United Political Parties (CUPP), Ugochinyere ended up pinpointing only at Omuma Ward

The information commissioner described the whole bravado as a calculated attempt by the PDP in Imo to take the shine off the highly successful working visit of the president to Imo State during which he commissioned some gigantic projects for the present administration.

On the issue of a secret suit Ugochinyere accused the government of filling in the state High Court against the use of Bivers, Emelumba said the investigation revealed that one Blessing Iwuagunwa (Esq.), a close ally of Emeka Ihedioha trickily collected the stamp of another lawyer, Anthony whose stamp was used and signature forged with which she filled the suit, as part of the calculated attempt to tarnish the image of the governor.

Emelumba also addressed the claim that INEC office in Omuma was burnt and indigenes have fled the area as a result of insecurity. He said contrary to the claim, Omuma is bustling with social, economic and religious activities, adding that the claim further authenticates the government position that insecurity in the Orlu zone was being sponsored by the PDP, to deplete the zone’s voting strength ahead of the 2023 elections.