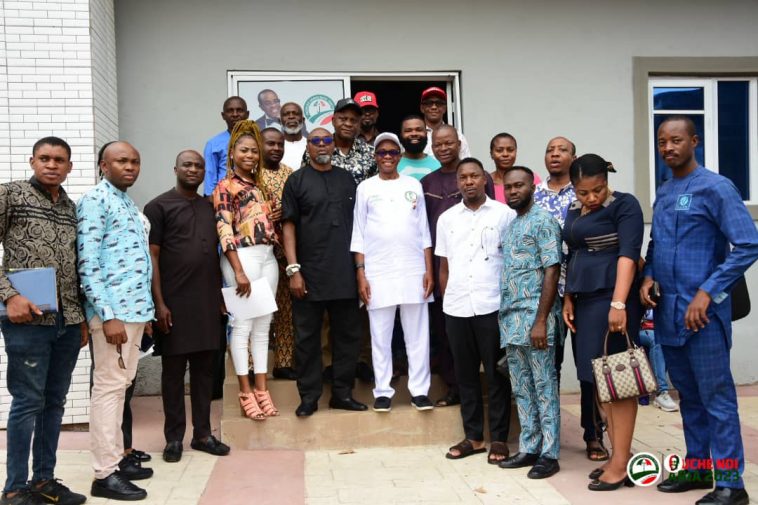 The Abia State gubernatorial candidate of the Peoples Democratic Party, PDP, Professor Uche Eleazar Ikonne has debunked the reports that he will be a stooge to Governor Okezie Victor Ikpeazu PhD stating that it will be an abuse of his intellectual capacity.

Speaking on Wednesday during a media interaction with members of the Abia State Online Media Practitioners code-named OMPAN in his Uche Ndi Abia Campaign Office, Umuahia, Professor Ikonne urged critics to stop de-marketing the State and focus on promoting it for the betterment of all Abians.

“Everybody came from somewhere and so, I was encouraged by Governor Dr Okezie Ikpeazu to vie for the office of the Governor. With my achievement and status, nobody can coerce me into doing what I do not want to do. A philosopher said success without success is failure. This means looking for someone who can be able to do what you were unable to do. It’s an abuse of intellectual capacity to be a surrogate of somebody. Governor Okezie Ikpeazu has said to people that if you need somebody to serve then it’s not Ikonne. I’ve always had a good working relationship with him since my time as the Vice Chancellor of Abia State University Uturu, ABSU.”

The former Vice Chancellor of Abia State University Uturu, ABSU, made it clear that he plans on unifying Abians and defeating the psychological war of genealogy which has been an age-long prejudice used by the elites to demarcate people in the State. He revealed that to ensure inclusivity of all Senatorial District, he plans to evenly distribute government services.

“Most of you here look at me like ‘Ngwa man’ no matter the level of my educational qualification and competence. This has been the dividing line. There’s an age-long prejudice that we have harboured. If government services are evenly distributed, then that line is not seen. So by service orientation, we can make every Abian feel secure and included in governance. From appointments, if every part of the State is represented then you begin to hear that despite the fact he is from this Senatorial District but he still favoured us. That ensures inclusivity.”

Further addressing the concerns on the payment of salaries and pensions in the State, Professor Ikonne revealed that he will make plans to clear up all arrears within six months.

“Nobody comes to government hoping to owe salaries or pensions but remember, there’s a government in power and I don’t know what will happen between now and the next six months. But if I’m handed arrears, I’ll make plans within six months to clear it off while looking at the challenges faced by the present administration. Of course, you know our system is rigged with corruption. You can’t rule that out as a factor for the accumulation of arrears. So we will make some diagnosis and handle every indebtedness.”

He also stated that government is participatory while declaring that public health practices have to be changed in the State.

“The last time I checked, we have over 1,300 health centres all over the State. What happens in each of these centres? What is the certification of people who work in these health centres? What basic equipment can you find in those centres? What baseline services can you afford there? Can they perform CPR? Or resuscitate someone who collapsed? Those are the questions we need to ask and strengthen those places. I built a health centre in my village but any time I go there, it’s like a ghost town. The community does not care or ask questions. If they post nurses as they do, nobody bothers to check if those nurses go to work or not. That’s why I said I’ll get communities involved in the government budget to them. People still practise open defecation even in this 21st century. In the civilised world, there are public conveniences which create employment and it’s always kept neat. Doctors talk about allowances and equipment brought into the hospital, what about the prevention of diseases especially the ones contacted by the dirty environment? Can’t we provide water for a community to ensure that waterborne diseases are mitigated? Can’t we improve on environmental sanitation? Malaria is endemic in Africa and we must try to prevent this disease. Every child born in Africa has the malaria parasite but with good nutrition, it can be suppressed. This is why we have stunted growth in Africa.”

He concluded that the problem of public schools lies with inadequate supervision adding that he will make sure that teachers whom he intends to pay constant salaries are monitored.

“In private schools, you are sacked if you do not come to school when you are supposed to and most of the teachers do not even have qualifications like the teachers in public schools. So we will partner with proprietors to provide quality education even to the least in the State.”