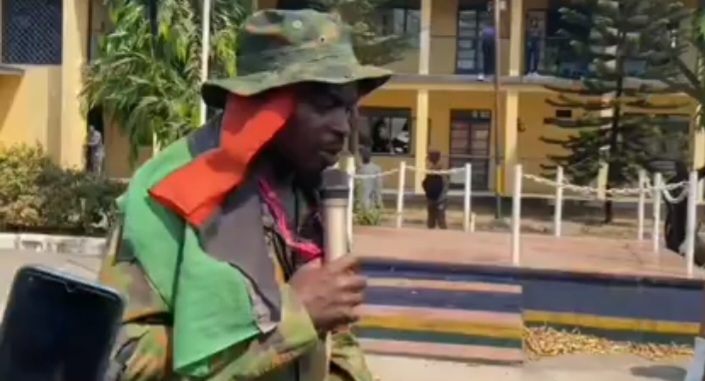 Imo state police command has detailed how its operatives nabbed one of the most vicious commanders of the Eastern Security Network (ESN), the armed affiliate of the Indigenous People of Biafra (IPOB) and who doubles as its Chief Trainer, Ex-Lance Corporal Nwangwu Chinwendu, a Deserter from the Nigerian Army.

Addressing newsmen on the recent breakthroughs of the Command while parading the suspect, Wednesday, the Command’s Public Relations Officer, CSP Michael Abattam, said the 34-year-old Onyeami, a native of Amaohuru Nguru, in Aboh Mbaise Local Government Area of Imo State, who has been on the wanted and watchlist of the state command for a very long time was arrested during the burial of his father.

He said tactical teams of the Command acted on credible information and swooped on Onyeami during the burial of his father, but not without a gun duel from his (Onyeami’s) gang members who positioned strategically and opened fire as soon as they sighted oncoming security operatives, but were overpowered by the gallant security operatives.

According to the PPRO, Police operatives also trailed the gang to their identified camp in Obowo, where they recovered more exhibits

“On 25/12/2022,  he (Onyeami) then volunteered and led the investigating teams, joined by the military to their Camp in Obowo, but on arrival, they discovered that the hoodlums had hurriedly deserted the camp,  setting fire in two vehicles to conceal the vehicles’ plate numbers.

Other exhibits recovered from the gang and displayed by the police include; vehicle plate numbers;
Seven (7) Police Belts;
Numerous registered Voters’ Cards from INEC offices and Three (3) ESN flags.

Meanwhile, while fielding questions from newsmen, Onyeami named some traditional rulers and politicians from the Mbaise nation among their sponsors.

Ogunyemi who confessed to having led the gang that carried out many vicious attacks, including the killing of security officials, killing of innocent civilians, burning of police stations, and burning of INEC offices, among others, said they act on the instructions of their leaders and sponsors.

He also confessed to having led the gang that killed the late Gulak, disclosing that as the Chief Trainer of ESN he has trained over one thousand (1000) members of the armed militia group.