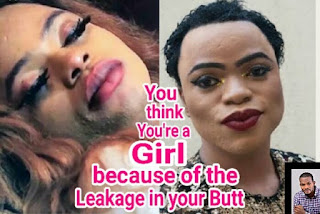 Following shemale Bobrisky’s revelation that she’s a girl after he was confronted by a fan who told him to date Nina of BBN, controversial actor Uche Maduagwu have written about it calling out Bobrisky on what made him a him a girl.
Read his post…

uchemaduagwuYou think you’re a girl because of the leakage in your BUTT…😀😄😃 @bobrisky222 You need to buy a bigger diaper, or better still, import extra large adult diaper from #CHINA, because its obvious the hole behind is getting bigger every day,😃🍌🍌 because i don’t think a reasonable #guy would come out on #social media to tell the world that he is now a GIRL, and you expect us to give you a chieftaincy title for being a disgrace to humanity, right?😃 Like seriously?

What exactly is the details of agreement between you and Madness?😀 I’m so angry right now because very soon our kids might start emulating him. Dear mothers, what would you do if your only SON is being expelled from secondary school for claiming to be a girl or for kissing other #boys in the mouth?😭 Or would you be #HAPPY if your eldest daughter who is in the University comes out on social media to say she is no longer a woman but a MAN?