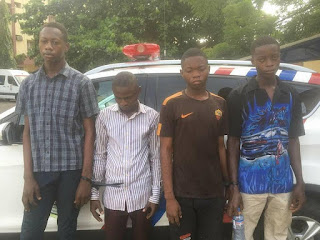 The suspects namely; Samuel Kayode, 28-year-old from Ondo State, Adebayo Ifeoluwa, 17-year-old from Osun State, Alayande Ahmed and Elusode Festus, 20 years from Edo State were all arrested in their respective states. Samuel Kayode, a part time teacher in two secondary schools based in Ilesa, disclosed that he also taught Physics and Mathematics in a private tutorial class where he assisted candidates who are planning to write the WASSCE examination with questions and already prepared answers for the candidates.