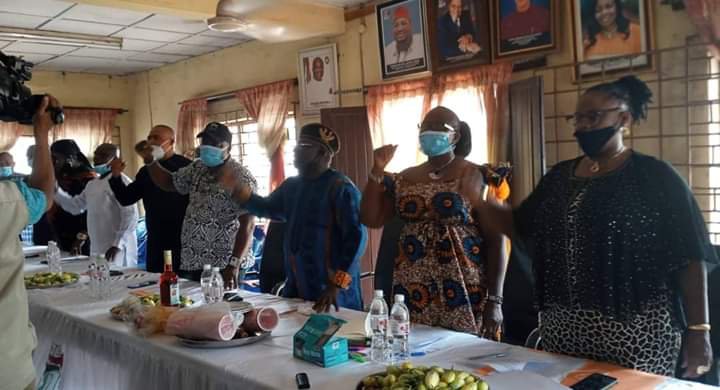 The Eastern Regional Working Committee of the Nigeria Union of Teachers, NUT, comprising the nine states of the defunct Eastern Region, Thursday, stormed Abia State to solidarize with teachers in the state who have been on indefinite strike.

Primary and Secondary School teachers in public schools in the state, penultimate week, decided to down tools over months of unpaid wages.

The NUT leaders drove around Umuahia the state capital on the convoy with a stop-over at some government establishments including the Secondary Education Management Board, SEMB; Abia State Universal Basic Education Board, ASUBEB; Abia State House of Assembly; the Workers’ Secretariat; and the Ministry of Local Government and Chieftaincy Affairs.

Addressing newsmen later at the NUT state headquarters, Awkuzu Lane, the Regional Chairman who also doubles as the Chairman of NUT Akwa Ibom State, Comrade Etim Etim Ukpong, called on the Abia State Government to quickly address the issues that led to the strike to save public education in the state from total collapse.

The Regional NUT leadership which endorsed the on-going strike decried the plight of teachers in the state following months of unpaid wages.

Ukpong, who however acknowledged the efforts of the Gov. Okezie Ikpeazu-led administration to address the issues urged the governor to act fast as the on-going strike will not be called off until the accumulated salary arrears are cleared.

Ukpong who read from a communique he jointly signed with the Regional Secretary, Mrs Nnenna Okonkwo, identified non-promotion of teachers for the past five years, non-payment of leave allowance for the past 10 years as some of the challenges that need to be addressed.

Other demands of the NUT include immediate remittance of teachers’ check-off dues to the union; and implementation of the current minimum wage to teachers at the Basic Education system.

NUT also decried “the poor state of infrastructural facilities in public schools in the state”, as well as “shortage of teaching staff occasioned by non-recruitment of teachers for many years”.

never granted ASUSS right of existence as “it is falsely claiming”, but simply returned the matter to the Appeal court for retrial since one of the justices on the appeal panel was absent during the earlier judgement of the lower court.

NUT urged teachers and the general public to disregard false claims and propaganda by ASUSS which it dismissed as ” an association of power-drunk secondary school teachers now parading as trade union”.

Eastern Regional Chairman of NUT, Comrade Etim Etim Ukpong, who addressed the press in Umuahia, after the union’s solidarity visit to Abia teachers on strike, claimed that ASUSS was created to cause division in NUT.

He alleged that some mischievous governors and a certain Minister were using the splinter group to whittle down the powers of NUT and make the union too weak to fight for teachers’ welfare.