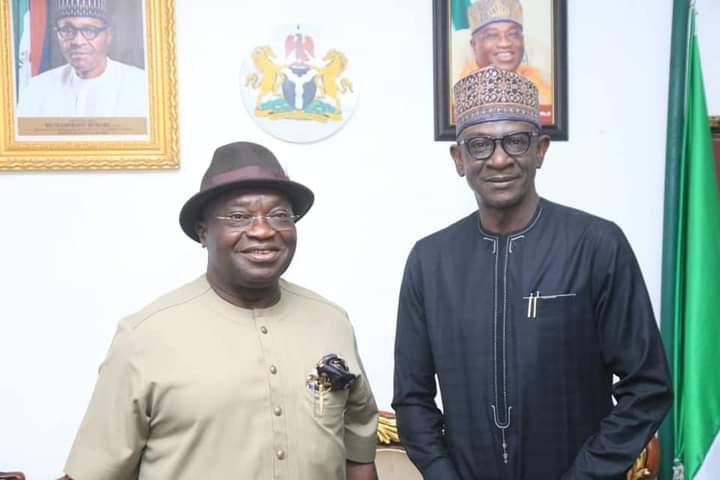 Governor Okezie Ikpeazu says that his administration will be open to greater collaboration with, and support from the Nigeria Export Import Bank (NEXIM) towards expanding the shoe sector in the state to measure up to the standard available in international markets.

Governor Ikpeazu who made this known when he received in audience the delegation of NEXIM Bank led by its Managing Director/Chief Executive Officer, Alhaji Abubakar Bello at the Governor’s Lodge Aba lodge explained that his administration has tackled headlong the major problems facing the leather and garments sector which include, Automation, Marketing and Power Supply noting that the aggressive marketing of Made in Aba products embarked upon by his administration has increased the confidence of the average Aba producer and this has started yielding positive results.

According to the Governor, apart from sending thirty Abia youths to China to study automated shoe production and the procurement of the machines to ensure consistency and massive production, his administration through dedication and synergy with the Federal Government attracted the Ariaria Independent Power while the Geometric power supply is in its last stage of completion the process to boost power supply.

He expressed satisfaction that the state has attracted the interest and partnership with the the major global shoe manufacturers of adding that the State Polytechnic in Aba will work closely with the Enyimba Automated Shoe Company (ENASCO) and the Footwear Academy in Aba to develop an academic program for the be certification of skilled shoemaker while the State Quality Control Agency will ensure high quality of these products.

The Governor appreciated the technical support so far received from the Enyimba Automated Shoe Company and encouraged all to take pride of their locally made goods as a way of supporting the young artisans in the shoe and leather garments sector which will have positive effects on the economy.

Speaking earlier, the Managing Director/Chief Executive Officer of the Nigeria Export Import Bank, Alhaji Abubakar Bello said their visit was to seek strategic partnership with Abia State Government in building skills of Shoe Manufacturers and other leather products with the aim of making Aba the headquarters of shoe manufacturing, not just in Nigeria but in Africa.

He noted with delight the efforts Governor Ikpeazu has made in the aggressive marketing of Made in Aba goods noting that their involvement will tackle head on, the challenges of restrictions in the export process as well as tariffs. Alhaji Bello formally sought the collaboration of the State Government in this direction and made a request to immediately visit the Shoe Factory, a request the Governor granted at once.

The Commissioner for Finance Dr. Aham Uko, Executive Secretary of the Abia State Planning Commission, Dr Mrs Nnenna Chikezie, The Director General of the State Marketing and Quality Control Agency, Mr Sam Hart, the Director General of the State Agency for Mass Mobilization, Chief Paddy Anyatonwu, the Special Adviser to the Governor on Inter Governmental Affairs, Mr Chinenye Nwaogu, Chairman of the Board of the Enyimba Automated Shoe Company, Mark Atasie and the Executive Director, Marketing of the Shoe Company, Adaku Uwaoma Onusiriuka Oseiza were present at the event.