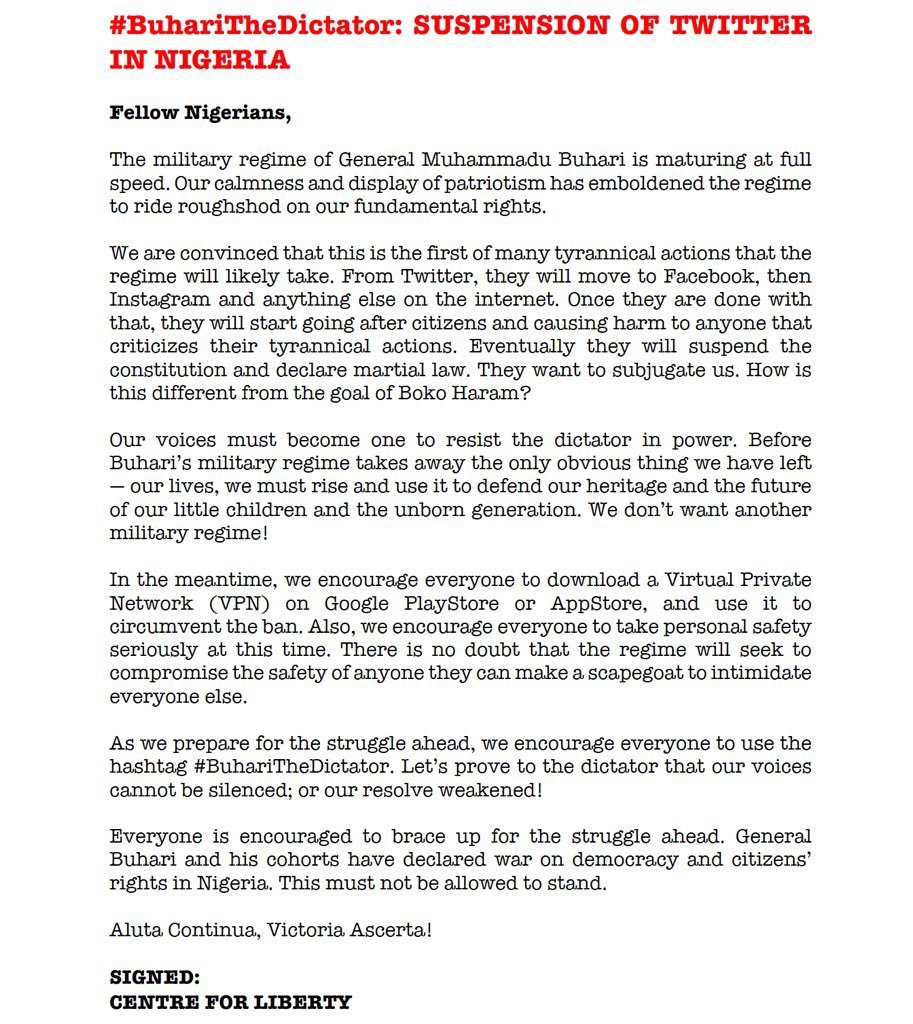 Centre for Liberty Nigeria has stated that the military regime of President Muhammadu Buhari has been emboldened and crippling the fundamental rights of citizens.

In a letter to Nigerians on Friday after the suspension of Twitter by the Buhari-led Presidency, the group called on Nigerians to have a united voice over the dictatorship of the President.

In the meantime, it appealed to Nigerians to download a ‘Virtual Private Network (VPN) on Google PlayStore or AppStore, and use it to circumvent the ban.’

The letter reads below;

The military regime of General Muhammadu Buhari is maturing at full speed. Our calmness and display of patriotism has emboldened the regime to ride roughshod on our fundamental rights. We are convinced that this is the first of many tyrannical actions that the regime will likely take. From Twitter, they will move to Facebook, then Instagram and anything else on the internet.

Once they are done with that, they will start going after citizens and causing harm to anyone that criticizes their tyrannical actions. Eventually they will suspend the constitution and declare martial law. They want to subjugate us. How is this different from the goal of Boko Haram?

Our voices must become one to resist the dictator in power. Before Buhari’s military regime takes away the only obvious thing we have left — our lives, we must rise and use it to defend our heritage and the future of our little children and the unborn generation.

We don’t want another military regime!

In the meantime, we encourage everyone to download a Virtual Private Network (VPN) on Google PlayStore or AppStore, and use it to circumvent the ban.

Also, we encourage everyone to take personal safety seriously at this time. There is no doubt that the regime will seek to compromise the safety of anyone they can make a scapegoat to intimidate everyone else.

As we prepare for the struggle ahead, we encourage everyone to use the hashtag #BuhariTheDictator. Let’s prove to the dictator that our voices cannot be silenced; or our resolve weakened!

Everyone is encouraged to brace up for the struggle ahead. General Buhari and his cohorts have declared war on democracy and citizens’ rights in Nigeria. This must not be allowed to stand.