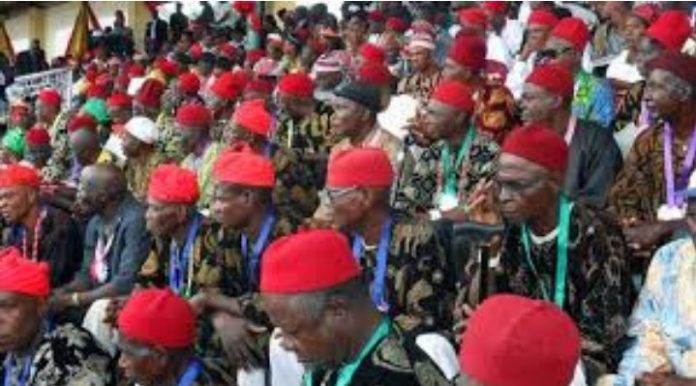 Shocked by the escalating and deteriorating state of insecurity in the homelands inhabited by Ndigbo, the Igbo Nationalist Movement has stepped out to voice out their concern against the threat of war, going on in Igbo land. The group further buttressed that this had led to the continuing deployment of additional troops, and security personnel to the region by the Federal authorities ostensibly in furtherance of President Muhammad Buhari’s avowed threat to treat the South-east and specifically Ndigbo in a manner inconsistent with the fundamental human rights to life which is enshrined in the Nigerian constitution. They are concerned that he repeated the threat in his live interview on AriseTV on Thursday, June 10.

Alarmed that the statement of the Nigerian President to treat them (Ndigbo and South-eastern Nigeria) in a language they will understand is an open confirmation of a willingness and desire to repeat the atrocities of the Biafra Genocides. The group called for peace and request that Mr. President owe them an apology and withdrawal of that statement. They equally called on the world to show interest in what is going on in Nigeria now, and not to wait to intervene after millions must have been killed, like they did in Rwanda.

Perturbed that following the President’s lead, a blanket shoot-at-sight order has been given by Nigeria’s Police Chief to policemen on special operation in the South-East region, accompanied by statements and directives which have already been put into effect with the deployment of hundreds upon hundreds of soldiers and security personnel accompanied with requisite military hardware.

Disturbed by the heightened increase in extrajudicial executions, abductions, and disappearances of Igbo youths (some brazenly executed in broad daylight) in the course of the past few weeks.

Worried about the inciting, hate-filled messages regularly churned out on social media by some individuals and groups, with some of such messages inciting listeners and adherents to murder, behead and maim military and security personnel and other stated individuals in Nigeria. Igbo Nationalist Movement in a Press Release signed by their leaders across the globe called for a sincere dialogue as the only way out.

INM took this step in their official release signed by Anthony Olisa Okolo Esq., Barr. Eze Eluchie, Chief Ben Okoro, Chief Peter Agba Kalu, Nze Ugo-Akpe Onwuka (Oyi) and
Onyemuche Mbachu, because they were emboldened by the realization that it will take the efforts of ALL well-meaning citizens to de-escalate the situation and create a moral consensus needed to bring an end to all violence aimed at all citizens.

As a result, the indigenous peoples of Ala-Igbo, under the aegis of the Igbo National Movement (INM) in the press release stated as follows:

1.The President Muhammadu Buhari-led Federal Government should as a matter of extreme urgency embark on express efforts to demilitarize Ala-Igbo and the South East and de-escalate the state of insecurity, by ordering an immediate withdrawal of the military from the streets of South-East cities and communities in Ala-Igbo;

2.That the five South-East State governments of Abia, Anambra, Ebonyi, Enugu and Imo States, should as a matter of urgency codify and operationalize the indigenous security outfit which they had all committed to for the region – Ebube-Agu. Said Ebube-Agu security outfit should as soon as possible, in collaboration with indigenous establishments such as the Town Unions, step in to restore a bottoms-up approach to security in the region.

4.That Ndigbo as a people do not engage in foul, incendiary, and uncouth language to achieve our aims or to assert our guaranteed freedoms. Therefore, they advice that Igbo groups and its leadership who does such do not represent the views of all Igbos, and should not be used by the Federal Government to characterize the disposition of the entire South-Eastern geopolitical zone towards the rest of the country, as Ndigbo are firmly committed to non-violent and constitutional means for advancing our demand for a fair, just and equitable country.

Address by President Buhari on his Official Visit to Armed Forces...