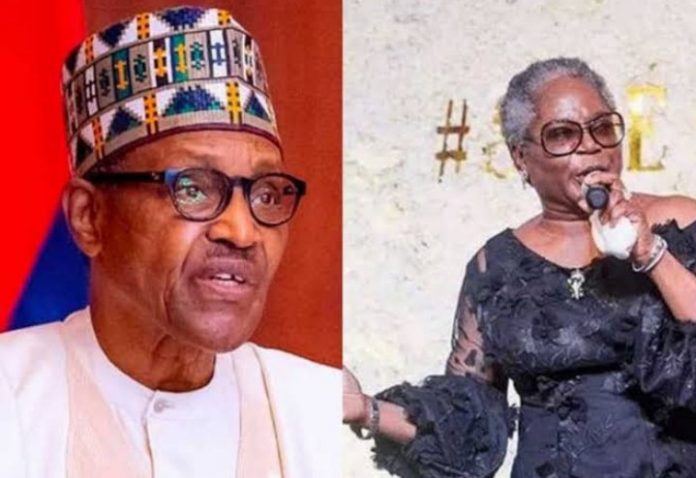 At a press conference organized by the Credible Igbo Women Initiative, CIWI, in Lagos, Human right activist and former Executive Director/Chief Executive Officer of the National Centre for Women Development, Onyeka Onwenu, expressed concern over the killings in South East.

Speaking on Thursday, Onwenu called on President Muhammadu Buhari to withdraw the Nigerian troops deployed in South-East and dialogue with secessionist agitators in the region.

This was in response to the killings of Igbo youths going on in the South East which is done by the Nigerian Security Operatives.

She said, “We come here together with one thing in our mind: peace, love and equity. Something dreadful is happening in south east right now. I happened to come from Imo state and I know what people are passing through there. Please, federal government should stop the killings

Some people want to agitate for referendum, it is their right. Some people want to cry out that they are being marginalized, it is their right. Listen to them. You may not agree with them, but they have the right to speak. We are begging, we are asking, please let’s sit down and talk about what is going on. Let’s call our people who are agitating, who are not happy with the situation and talk to them. Nigerian government let’s talk. Pull out the troops from Igboland.

“I want to use this opportunity to reach out to our young people to embrace dialogue. Please, come let’s talk. We will stand for the right of Igbo people”, Onwenu appealed.

Meanwhile, CIWI, in a communique read by Elvira Silas, condemned the reckless spilling of innocent people by the security operatives, and militarization of Igboland and apparent threat by the federal government to use maximum force in dealing with the problem of insecurity in the south east.

The communique read in part, ” we call on the federal government to convoke a security conclave forthwith and stop the bloodletting and remove killer squad from Igboland. No more killings, no more brutality, no more harassment and intimidation of our children.

“We also call on the government to console and compensate the men and women whose children met their untimely death in the hands of the gunmen, both known and unknown.”