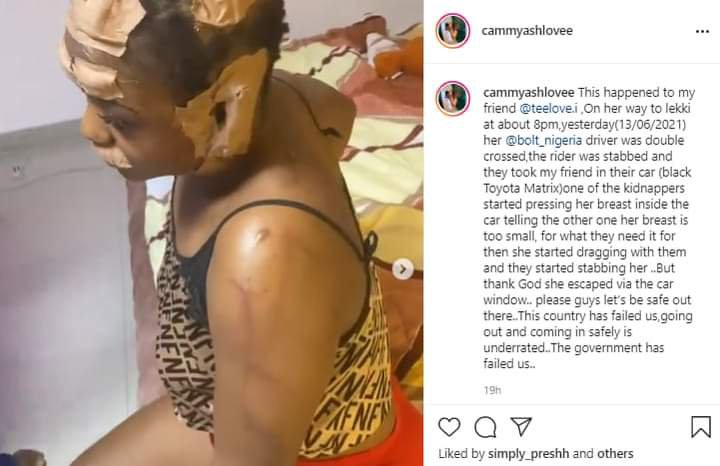 A lady identified as Cammy on Instagram has narrated how suspected kidnappers attacked her friend identified as Tee in Lekki, Lagos State.

According to Cammy, her friend who sustained serious injuries was attacked on Sunday, June 13th, 2021.

It was gathered that the suspected kidnappers double-crossed the Bolt driver, stabbed him and took Tee in their car.

The kidnappers sized up her breast but said it was too small for what they wanted it for.

”This happened to my friend @teelove.i ,On her way to lekki at about 8pm, yesterday (13/06/2021) her @bolt_nigeria driver was double-crossed, the rider was stabbed and they took my friend in their car (black Toyota Matrix)

One of the kidnappers started pressing her breast inside the car telling the other one her breast is too small, for what they need it for then she started dragging with them and they started stabbing her. But thank God she escaped via the car window.

please guys let’s be safe out there..

This country has failed us,going out and coming in safely is underrated..

The government has failed us”she wrote