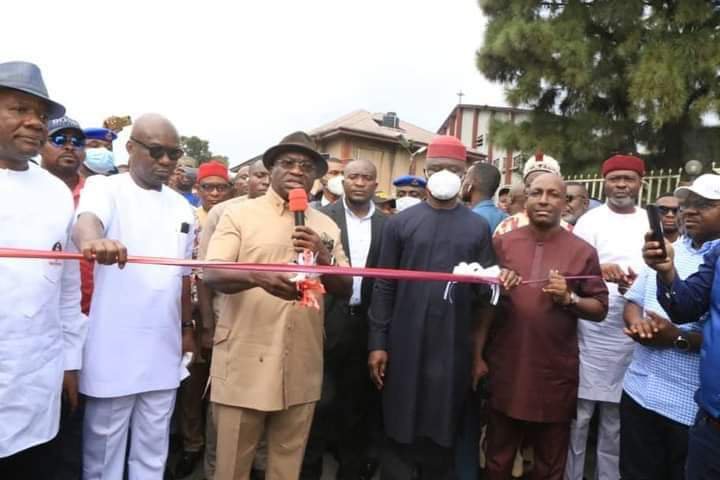 Commissioning the road which is in continuation of his ‘Kinetic Abia‘ Project Inspection and Commissioning Programmes, Dr. Ikpeazu assured that the road which was built with Cement Pavement Technology would last 25 years. He said it is wrong to build roads without drainages, maintaining that subsequent administration would not come back to reconstruct any road he constructed.

Governor Ikpeazu equally assured that he will complete and commission all road projects embarked upon by his administration including the Osisiọma flyover. According to him, he will continue to work for the people of the State until his last day in office.

Speaking, the Deputy Governor, Rt. Hon. Ude Oko Chukwu said the road is very critical to the residents of the area and Aba in general. He added that the continuous commissioning of roads by Governor Ikpeazu is proof that the administration has fulfilled its campaign promises, assuring that he will continue to commission more roads until 2023.

Also, the Speaker of Abia State House of Assembly, Rt Hon. Chinedum Orji, Chairman, House Committee on Works, Hon. Ginger Onwusibe and other House members present assured that, based on the achievements of the Governor, they will do everything within their powers to assist the Governor do more of such roads for the people. They said anyone who does not appreciate the efforts of the Governor in infrastructural development does not love Abia State. They further said the House is proud of the Governor and will continue to provide legislative support to enable him continue taking Abia to the higher heights.

Contributing, the Commissioner for Works, Elder Bob Ogu said the road is very important to the economy of the area and the State , adding street lights will be installed shortly on the road. He informed that the next phase of the road project will be an extension of the road with a bridge that would link the road with Ogborhill disclosing that the design of this next phase is ready.

In an address presented on behalf of the Executive Chairman, Osisiọma Ngwa LGA, Christian Kamalu, the Deputy Chairman thanked the Governor for the show of love by the Governor and assured that they will not take it for granted.
He said the Osisiọma people are appreciative of Governor Ikpeazu’s benevolence to the council and listed many roads constructed and delivered by Governor Ikpeazu and others currently under construction.

Also speaking on behalf of SS Anthony & Jude Catholic Church located along the road, the Parish priest, Rev. Father Francis Onuoha, said everybody is happy over the construction of the road and later made a special presentation to the Governor.

In their various speches, an indigene of the area and former Commissioner for Transport &, Housing, Prince Enyinnaya Ubani, ACCIMA President, Sir Lawrence Obetta, the Chairman Landlords Association, Immaculate Heart Avenue Road, Aba, Prince Nwaeze thanked the Governor for constructing the road adding that building the road has proven the resolve of Ikpeazu’s administration to develop the State. They added that the construction of the road has assisted in checkmating the activities of hoodlums in the area and thanked the Governor for a job well done.

The event attracted an array of dignitaries including students of the various schools located in the area.