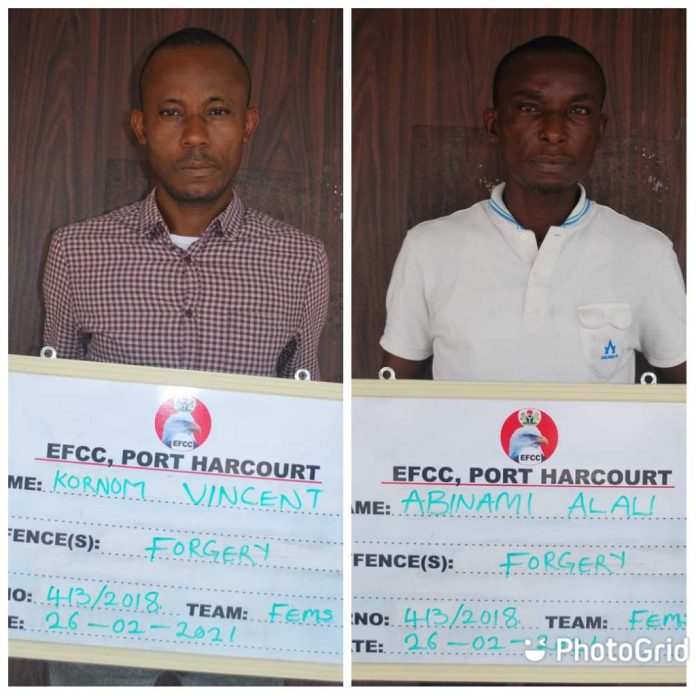 Justice S. D. Pam of the Federal High Court sitting in Port Harcourt, Rivers State has convicted and sentenced Abinami Alali and Kornom Vincent to two years imprisonment each for conspiracy and forgery.

They were jailed on July 1, 2021, after pleading “guilty” to separate three count- charges bordering on conspiracy and forgery, upon their arraignment by the Port Harcourt Zonal Command of the Economic and Financial Crimes Commission, EFCC.

One of the counts read:

“That you Abinami Alali on or about the 30th day of August 2018 at Port Harcourt, Rivers State, within the jurisdiction of this honourable court did conspire with one Kornom Vincent to commit felony to wit: uttering of forged documents thereby committed an offence contrary to Section 1(2) (a) of the Miscellaneous Offences Act CAP M17 of the Revised Edition (Laws of the Federation of Nigeria) 2007 and punishable under Section 1 (2) (c) of the same Act”.

“That you Kornom Vincent on or about 30th day of August 2018 at Port Harcourt, Rivers State, within the jurisdiction of this Honourable Court did fraudulently and knowingly forged a document to wit: Access Bank Teller dated 30th day of August 2018 with the intent that its content may be used or acted as genuine and purported to have emanated from Access Bank Plc, which you knew it to be false and thereby committed an offence contrary to Section 467of the Criminal Code Act, Cap C.38 of the Revised Edition (Laws of the Federation of Nigeria) Act, 2007 and punishable under the same Act”.

They pleaded “guilty” to the charges preferred against them.

Justice Pam convicted and sentenced both Vincent and Alali to two years imprisonment each with an option of a fine of Two Hundred Thousand Naira (N200, 000.00) payable into the Federal Government’s Account.

The convicts’ journey to the Correctional Centre started when some established intelligence of the EFCC, showed that they forged deposit slips and official stamp of Access Bank Plc, to process Building Permits of the Ministry of Urban Development, Rivers State. The forgery was investigated, leading to their prosecution ad conviction.