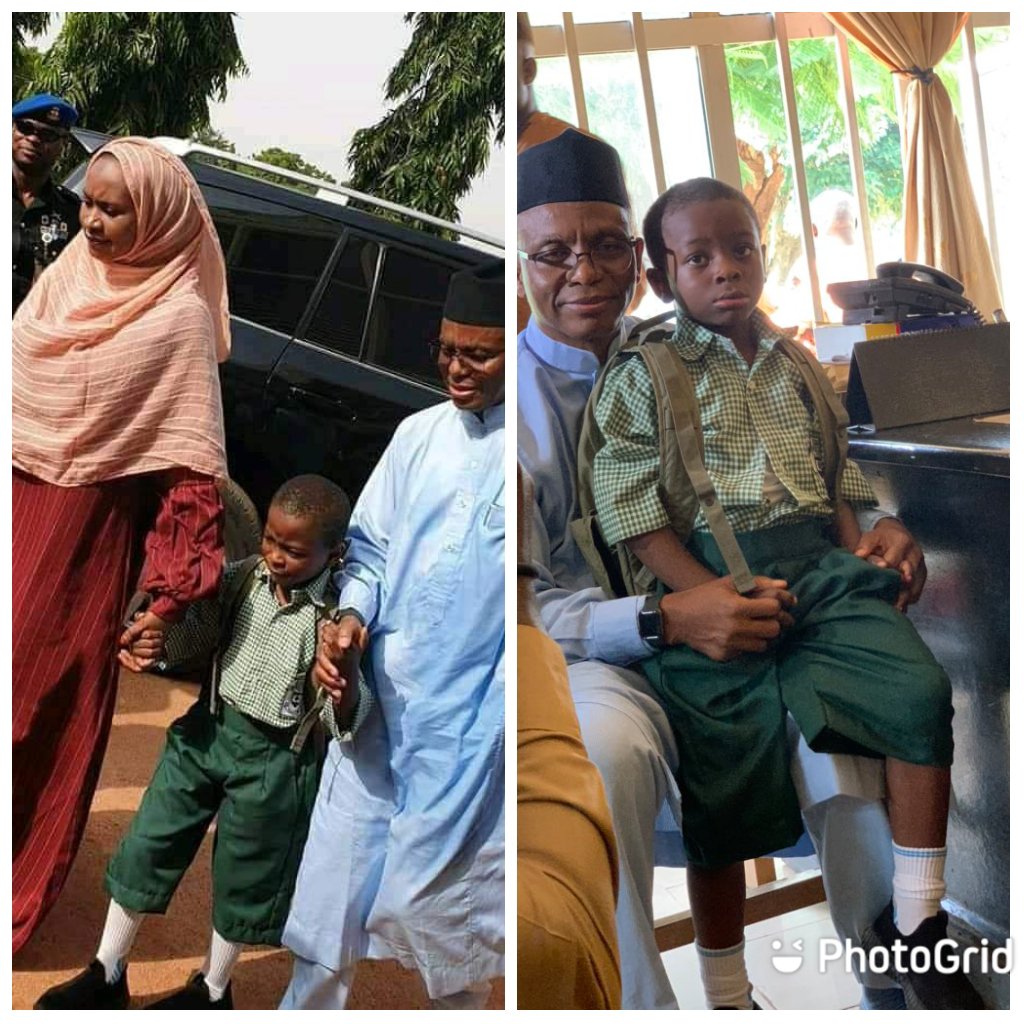 Not quite long ago, Kaduna State Governor, Nasir El-Rufai, quietly withdrew his son, Abubakar Al-Siddique, from Capital School Malali. This was after scoring cheap political points by enrolling him in a public school in 2019.   Al-Siddique’s enrolment was characterised by both political and media stunts, with photo ops of him and his father dominating the media space at the time. His withdrawal was, however, hush-hush.

But for the prying eyes of the media, the withdrawal would have gone unnoticed. We know that Kaduna has been in the news for the wrong reasons in recent times.  Kidnap cases have been on the rise and the governor has insisted that he will not negotiate with criminals. Unfortunately, he can’t stop the bandits from having their way. So, they have launched special attacks on Kaduna schools, carting away students as they wish.

Between January and July this year, 204 Kaduna schools students have been abducted. This is the official figure by the state Commissioner of Police, Umar Muri.  Schools attacked include College of Forestry and Mechanisation, Mando Afaka –where thirty-seven students were kidnapped and Green Field University along Kaduna-Abuja Highway where twenty-three students were abducted.  Nuhu Bamalli Polytechnic, Zaria recorded two kidnapping incidents. The first involved three students and the second two lecturers and seven students.

At The National Centre for Tuberculosis and Leprosy Saye, Zaria LGA of the state, eight people were kidnapped before the Bethel Baptist Academy, Maraban Rido, incident where one hundred and thirty-five students were kidnapped.  Knowing that his son could be a victim, the governor cleverly took him away to be homeschooled. Unfortunately, majority of Kaduna residents don’t have such privilege, hence their children have become objects of attacks.

Meanwhile, as bandits are threatening to kill the 15 students of College of Agriculture and Animal Science, Bakura in Zamfara State, abducted a few days back, Governor Aminu Masari of Katsina State is accusing residents of the state of being too soft on bandits. Recall that over 300 students were kidnapped from a boys’ science secondary school in the state in December last year. This same Makuri has also been photographed with bandits in the past. But, on Tuesday, the governor said the people of the state have emboldened terrorists by being too afraid of them.  He advised his people to arm themselves against their killers.  This, he said, despite the absence of any law that permits citizens to carry arms for self defence.  Clearly Masari, in abdicating its role and responsibilities as the chief security officer of his state, has turned the tables on the people.  While the people ought to be demanding accountability from him, he is invariably blaming them for being unsafe in their own land.  It’s like blaming someone whose goods are stolen for exposing them to the thief.

I just pity people who still keep supporting Nigerian leaders based on religious and tribal sentiments.  These leaders are destroying this country while taking care of themselves and their families in saner countries where leaders understand the true meaning of leadership.   They send their children to the best schools abroad; their families enjoy the best medical care the world can offer. The other time our President’s son was involved in a fatal accident, he was flown to Germany and Nigeria bore the full cost of a first class medical attention given to him. Meanwhile, Nigeria is rated as the world capital for deaths of children under the age of five-many of these children are born by the poor-the people these politicians deceive with religion and other tribal jargons.

Let’s get this clear. Religion and tribe have nothing to do with development.   Those who have visited Islamic countries governed by progressive leaders can attest to the fact that there is hardly any difference between them and the western world in terms of development.  Technologies are adopted and adapted for the comfort and benefit of their people without questioning the religious background of innovators.

Today, Dubai is ruled by 71-year-old Sheikh Mohammed bin Rashid Al Maktoum. This billionaire king is renowned for overseeing the transformation of Dubai into a top business and tourism destination.

Despite being an Islamic state under an autocratic regime, Dubai has continued to attract people of other faiths, cultures and beliefs. Nobody is afraid of visiting Dubai.  As a matter of fact, people come from all over the world to spend their vacation in a desert. Sheikh Mohammed himself studied English at a language school in Cambridge before being trained at the British Army’s Mons Officer Cadet School in Aldershot, Hampshire.

Dubai boasts of having the world’s tallest building, the Burj Khalifa. That feat couldn’t have been achieved without making use of the best of technologies in the world. Other edifices like the Dubai Mall, Dubai Metro, technology park, the Palm Island, etc. are all world-class structures.

How come, the only thing that our own leaders do with religion is to impoverish their people? How can anyone explain the ease at which Nigerian leaders live in absolute splendour with their family members while the people they govern live in squalor and abject poverty?  Yet they are always eager to play their religious and tribal cards at every electoral season.  Now, they have started campaigning for the rehabilitation of repentant Boko Haram members. They have been begging bandits to repent and have even reabsorbed some of them into the society only for those ones to return to their wicked acts.

Perhaps, the people defending bad governance on the basis of religion and tribe should be reminded that these criminals are not likely to go near our governors or the President. And should they do, there is more than enough money in Nigeria’s treasury to pay as ransom for them and their families.  Forget about Nigeria’s indebtedness to the tune of over N33 trillion.   These people will pay and still tell us that their release is divine.

Remember the testimony of the Niger State Commissioner for Information, Mohammed Idris, recently released by his abductors?  He said he didn’t pay a dime. To him, his release was as a result of divine intervention. His testimony: “As a Muslim, prayer is the best shield against evil. Allah has a way of testing the faith of believers. My abductors regretted their cruel action and I have forgiven them. I urge you to forgive them too.”

But the over 136 school pupils kidnapped from Salihu Tanko Islamiyya School in Tegina, Niger State on May 30 are yet to get the same divine intervention. They are still with their abductors 90 days after their kidnap. This is after their parents have paid N50m ransom to their abductors.

According to reports, Ali Kachalla, the bandit’s kingpin holding the pupils has refused to release them even after collecting the ransom. Rather, he has introduced fresh demand for six motorcycles. Unfortunately, the distraught parents could no longer raise any more money to meet this fresh demand.

Kachalla has also refused entreaties from Fulani leaders engaged as mediators to secure the release of these children. Interestingly, this Kachalla is not living in the forests. He has his abode among his people. They know him. They know his house. A three-man delegation was even sent to his house to negotiate with him, according to reports.  But, he avoided going to his house for many days until the delegation left in frustration.  Does it mean that these students and others that have remained with their abductors are not as righteous as the Niger State commissioner, or why haven’t they also enjoyed divine intervention?

Nigerian doctors have been on strike for weeks now.  Expectedly, this hasn’t stopped our leaders from travelling abroad to enjoy their world -class medical treatment. President Muhammadu Buhari just returned from the United Kingdom. For the 18 days he was in the Queen’s land, governance and power relocated with him to the UK since he refused to hand over of power to the vice president.  Nigeria’s presidential jet was also stationed in London for his use.  Now, our President is back and we should all be happy I guess.

Yet, this is not how things work in some other countries. I remember a trip to Turkey where government officials took us round the country’s best hospital. One of the selling points then was that the facility was world- rated and among the very few in the world where, for example, the President of the United States could be treated in case of an emergency. Turkey is an Islamic country, yet it boasts of world class institutions. I don’t want to dwell on the history of Turkey. It is not about any religion. It’s all about leaders wanting their country to compete favourably among the best in the world!

The painful thing is that Nigeria keeps training our medical personnel for the benefit of the developed countries.  Over 80 per cent of Nigerian doctors are currently seeking job opportunities abroad, according to Nigeria Health Watch.

I have said this before. The Nigerian Government spends at least N3, 860, 100 to train a medical doctor in its universities. No private university here will do that for less than N10million. Some charge as high as N3m per session. Yet, this is far cheaper than what it costs to train doctors in many other parts of the world. For instance, the unit cost of training a doctor in the British National Health Service (NHS) is estimated at between £269,527 and £564,112 for a Foundation Officer 1 and Consultant respectively.  No wonder, Britain and quite a number of other countries rush  to recruit Nigeria’s qualified doctors.

A medical doctor in the USA pays an average of $2,398 a month for a 30-year repayment plan (360 payments). In other words, a medical doctor owes taxpayers and government $863,500, paid back in monthly instalments.

Nigeria invests its scarce resources in training doctors, they go elsewhere to practise. Government refuses to pay the ones at home.  Citizens die needless deaths because doctors are on strike. Does that make sense?

My conclusion is that our leaders are shameless, selfish and hypocritical.  So, the big task ahead is how to make them create a country that works for everyone.  The earlier we come together as a people to demand good governance, irrespective of our religious and ethnic differences, the faster we will move towards the goal of national development. No reason is tenable enough to justify the current level of rascality among Nigeria’s political class.