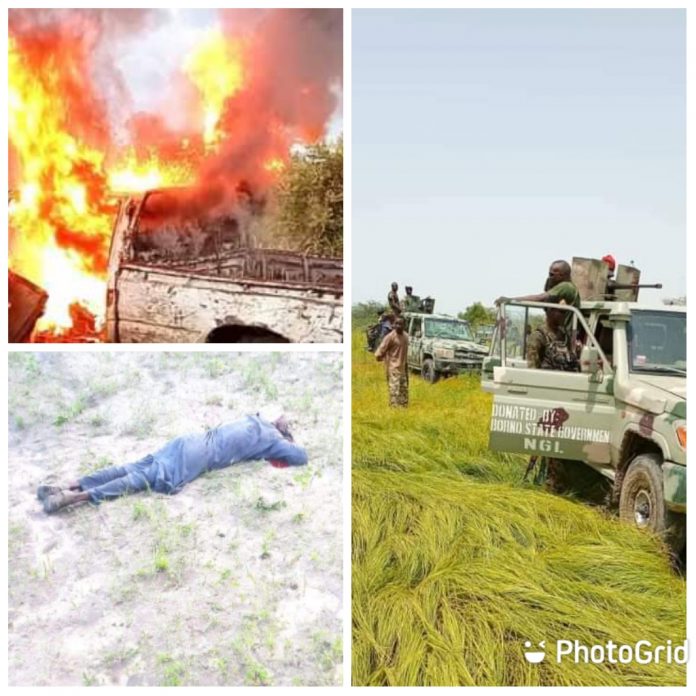 This was made known by the Director Army Public Relations, Onyema Nwachukwu, on the 2nd of September 2021 revealing that the troops of 195 Battalion, Sector 1 OPHK in conjunction with elements of Civilian Joint Task Force (CJTF) at Dusman-Muna Garage, Borno state, destroying logistics vehicle conveying contraband items to the terrorists.

Arms and ammunition were recovered from the terrorists.

Troops of 25 Brigade operating under the aegis of Joint Task Force, North East, Operation HADIN KAI (OPHK) have neutralised 4 terrorists of the Islamic State West Africa Province (ISWAP) on Wednesday 01 September 2021. The terrorists who were on espionage along Damboa-Bulabulin- Maiduguri road ran into a fighting patrol team at Kukawa and were neutralised in the fire fight that ensued with the troops. On further exploitation after the encounter, the gallant troops recovered from the terrorists, four AK 47 rifles and four Magazines, each loaded with 30 rounds of 7.62mm (Special) ammunition.

In a separate operation, troops of 195 Battalion, Sector 1 OPHK in conjunction with elements of Civilian Joint Task Force (CJTF) at Dusman-Muna Garage, Borno state have eliminated two ISWAP terrorists in an ambush operation conducted along an identified ISWAP terrorists’ crossing point at Musari village. The troops also captured and destroyed an ISWAP logistics vehicle conveying assorted goods and contraband items belonging to members of the terrorist group. Items recovered by troops from the terrorists’ vehicle are two bags of Hemp (Cannabis Sativa), 2 bags of Detergent,120 packets of mosquito coils, l2 mosquito nets and five textile materials. Other items recovered are two bicycles, two bags of beans, a bag of corn and some quantity of fish.

The Chief of Army Staff Lieutenant General Faruk Yahaya has commended the troops for their operational exploits and urged them to maintain the aggressive posture in order to decisively root out the terrorists from their enclaves.