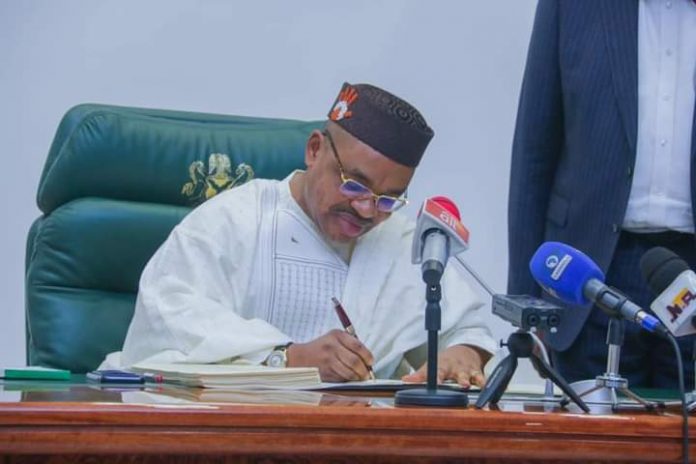 Governor Udom Emmanuel has vowed to ensure that henceforth anyone whose livestock strays into another person’s farm or property, no matter how highly placed, will be made to face the full weight of the new anti-open livestock grazing law of Akwa Ibom State.

He said it would be unnecessary for anyone found culpable to attempt to use his power or influence, as the law will be fully invoked to ensure that justice is served.

The Governor stated this when he signed into Law a Bill to Prohibit Open Rearing and Grazing of Livestock and Provide for the Establishment of Ranches in Akwa Ibom State.

“The law will be used against you, irrespective of who you are, so make sure you create ranches to take care of your livestock.

“It is very painful for a farmer to wake and discover that the crops that he had toiled for several months have been destroyed by your cattle.

“Just as you are rearing your animals to make profits, the farmer is also aiming for profits and as such you should not come and destroy his own business with yours.

“Once you are caught, such animals would be confiscated and the fine would add to the revenue of the state government, and shall also be used to settle the loss of the farmer,” Governor Emmanuel said.

The Budget signing by the Governor was witnessed by the State House of Assembly Speaker, Rt Hon Aniekan Bassey with the Attorney General and Commissioner for Justice, Mr Uko Udom (SAN).

Also in the exco chambers during the ceremony was the wife of the Governor Dr. (Mrs) Martha Udom Emmanuel, who was earlier inaugurated to head the
Akwa Ibom State Gender Based Violence Management Committee, and the State Deputy Governor Mr Moses Ekpo, inaugurated as Chairman of the Akwa Ibom State Road Safety Management Committee, chaired by the Deputy Governor, Mr Moses Ekpo.

The new Law promotes modern techniques in animal husbandry, prevent the destruction of farms by wandering cattles, and aims to address clashes between herders and farmers in the state.

It also promotes international best practices in livestock administration, regulation and control in the state, among other things.

The House of Assembly, Tuesday at plenary passed the Bill into Law.