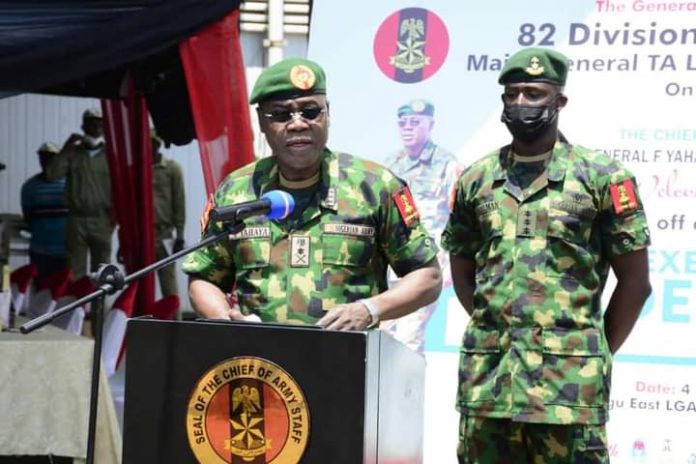 In a concerted and relentless effort to support civil authorities in tackling diverse security challenges bedeviling the country, the Chief of Army Staff (COAS), Lieutenant General Faruk Yahaya has flagged off three Nigerian Army Field Training Exercises in Emene, Enugu State, on Monday 4 October 2021. The flag off symbolically activated the exercises in four geopolitical zones of the country.

In his remark during the ceremony, Lt Gen Yahaya identified the exercises as Exercise STILL WATER, ENDURING PEACE and Exercise GOLDEN DAWN, which he pointed out, will be conducted simultaneously in South South, South East, South West and North Central Nigeria respectively. These exercises, he added would seek to confront the multifaceted and contemporary security challenges prevalent in different parts of the country. He noted that the exercises aim to restore law and order in the affected regions, as well as create enabling environment for socio-economic activities to thrive.

The COAS further charged officers and soldiers to remain professional, steadfast and diligent in the discharge of their responsibilities in consonance with the objectives of the exercises. He urged the troops to ensure respect and protection of the Fundamental Human Rights of the populace in conformity with the provisions of the Constitution of the Federal Republic of Nigeria as they discharge their responsibilities. He however enjoined the citizenry to be law abiding and cooperate with security agencies in order to restore of law and order in the country. He stated that the exercises, which would later metamorphose into real operations would witness collaboration with other security agencies in exchange of ideas and sharing of intelligence.

“It will be conducted in collaboration with sister security agencies, including the Nigeria Police, Department of State Services, Air Force, Immigration, NDLEA, NSCDC, FRSC, Federal Fire Service, as well as other stakeholders who will provide necessary support for the exercise,” he added.

Speaking also during the flag off, the General Officer Commanding (GOC), 82 Division, Nigerian Army, Major General Taoreed Lagbaja, in a welcome address, assured the COAS of the readiness of the Division in conjunction with sister security agencies to combat all security threats and crimes within the region to ensure law and order. He warned all criminal elements to desist from their attrocious activities or face the wrath of the law.

In furtherance of the fulfilment of his pledge to empower Regimental Sergeant Majors ( RSMs) of the Nigerian Army, the Chief of Army Staff presented a Toyota Hilux vehicle to the 82 Division RSM. “This empowerment scheme”, he noted, “will enable the RSMs to effectively carry out their duties as custodians of traditions and regimentation of the NA”.
The flag off was witnessed by Commanders, heads and representatives of sister security agencies domiciled in Enugu state.