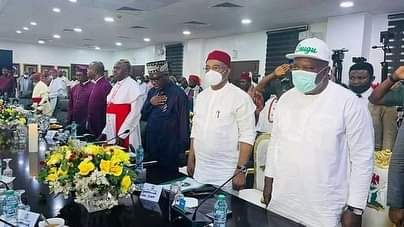 The Governor of Imo State, Hope Uzodinma has stated that the pain of the civil war can only be assuaged through equitable distribution of resources and fairness not secession from Nigeria.

Uzodinma opined that the people of the South-East deserves a commensurate measure of development commission which will be a stepping stone to address the grievances of the Igbos.

Speaking during the flag-off of the South-East zonal public hearing on the review of revenue allocation formula held in Owerri recently, Governor Uzodimma emphasized that this approach will create jobs for teeming youths.

“Dialogue and lobbying is the only way to address the problems and challenges of the South-East.”

According to him, the resultant effect of review on revenue sharing formula would give rise to a new formula that would create the development we seek in our zone.

Speaking further on modalities put in place to bring South-East to the front burner, Gov. Uzodimma noted that the South-East Development Commission recently legislated upon, would serve as the channel through which the grievances of the Igbos would be deliberated and acted upon.

Gov Hope Uzodimma reiterated his commitment to ensuring that the Igbos get a fair share of that which rightfully belongs to them.