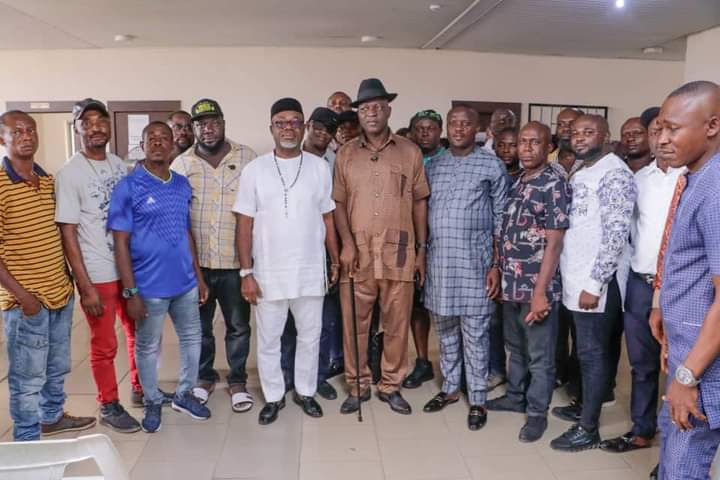 Abia State Government has inaugurated the inter-ministerial task force on street trading and illegal motor parks to oversee the maintenance of order around Osisioma Interchange (Flyover) and its environs, with a charge to the members to sanitise the area and return it to a status befitting a major entry point to the commercial city of Aba.

Inaugurating the Committee on Tuesday at the conference room of Ministry of Trade and Investment, the Commissioner for Trade and Investment, Chief John Okiyi Kalu and his Transport counterpart, Hon Chief Godswill Uche Nwanoruo, both of whom performed the inauguration on behalf of the state government, stated that the assignment of the task force became necessary following the directive of the Governor, Dr Okezie Ikpeazu, to rid the area of illegal trading and vehicular activities which are constituting nuisance to the environment and defacing the newly constructed interchange which is the first ever in the state.

Speaking during the inauguration, Chief Okiyi said that members of the task force were carefully profiled and selected based on their pedigree and urged them to see their appointments as a call to duty to ensure that the Osisioma Flyover up to Express Road junction axis of Ariaria International market is neither converted to a motor park nor turned to a narket area.

“As a task force, you must ensure that no street trading takes place within that area; we must end the practice where our roads are taken over by street traders and converted to illegal motor parks by individuals and commercial drivers. The task force has the responsibility of cleaning up the area, ensure that nobody trades on roads or park their vehicles illegally. This assignment must be taken seriously as the Governor has directed that you ensure total success with zero tolerance for failure”, he said.
.
He further charged them to always wear their identity cards and vests during work hours and carry out their assignments even beyond the usual work hours to ensure that drivers and traders do not take advantage of their absence to take over the area in the evenings.

“We have many markets in Aba where our people can safely do business instead of risking their lives and means of livelihood in open and illegal places. For an all round effectiveness, we will extend this task to other areas of Aba and Umuahia in order to have our cities sanitised.

On his part, the Commissioner for Transportation, Chief Nwanoruo informed that all the parks around the concerned axis have been closed and urged transporters to make use of only approved parks in the state. According to him, “the Governor has approved the closure of all the parks around Osisioma flyover up to Ariara junction. We are going to ensure that no vehicle stops to drop or pick passengers along that axis. We will provide necessary support to you, including security agents to ensure that everyone complies with the order without exception. You must ensure that you do your work without extorting money from traders or transporters as any of you caught doing so will not only be replaced but duly prosecuted.

Responding, the Chairman of the task force, Chief Amanna Nwaogu, thanked the governor for the opportunity to serve the state and promised to ensure that the directives of the government are carried out without fear or favour.

Those in attendance during the inauguration include the
Permanent Secretary ministry of Trade and Investment, Chief Sir Michael Egwu, Director of Commerce, Elder Udensi, Director of Transport, Chief B.T. Oleka and other top management staff of the two ministries.