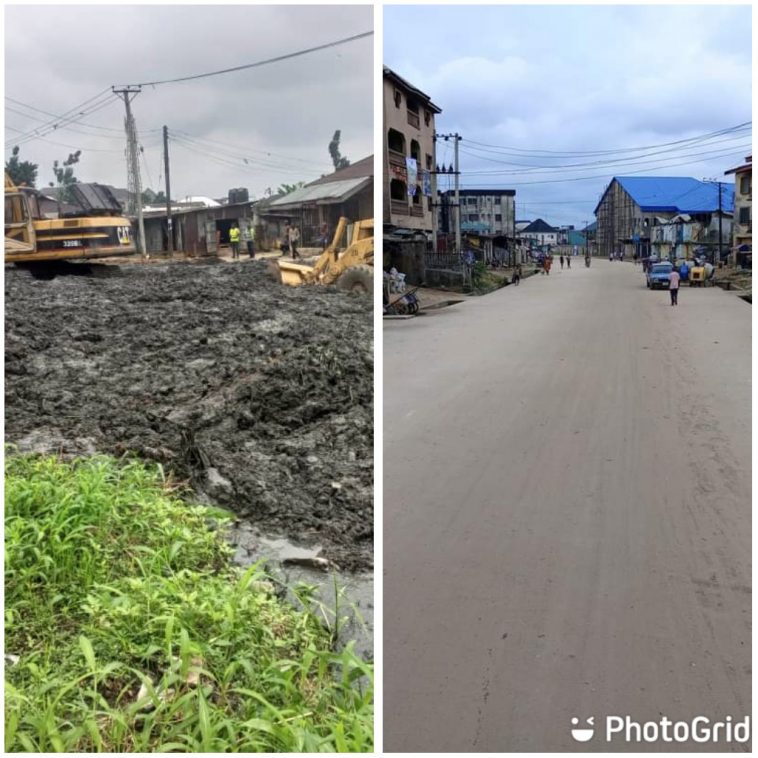 The Governor, Dr Okezie Ikpeazu PhD has made it clear that his administration has taken the scientific approach towards addressing the perennial flooding in some areas of the State and also building road infrastructures that will outlive his administration.

Speaking on Saturday during a visit of the members of Online Media Practitioners of Abia State, Dr Ikpeazu said undertaking the governorship mandate in 2015 came with a lot of passion mixed with emotional pain which arose from the decay he saw on the ground.

Citing the Omuma road, the Governor who stated that his administration has done more than 150 road networks in the State, revealed that before Omuma road phase 1 was worked on, flourishing fruits were having a field day at the roads and knowing what he wanted and seeing the pains of the residents, a total overhauling was done to recover the phase 1 part of the road and boost the economy of the people and the State in general.

“In my style of leadership, I’m a student of evidence-based leadership. I am going to build the first humanitarian library where I will document everything about my path. Part of that library will bear Scientific Leadership Studies. The bane of leadership in Nigeria and Africa is that we are not scientific about our interventions and that’s why we also fall into the same pit as our predecessors. It is not that those who came before me did not do any road in Aba, they did, including a few interventions here and there in Aba. Even Umuahia. During the administration of Governor Orji Uzor Kalu, he did so many interventions on the Aba-Umuahia road, even my predecessor also did an overlay on that road but all of these failed. So my first question will be, why did it fail? So that I won’t do my own and it will fail.

That’s why I brought in Arab contractors and they had to do a special technology taking into cognizance the underground water that passes through. And that road has been standing for about 5 years. If I didn’t ask the right questions or employ the right tools, I would not have achieved that feat.

When we introduced rigid cement technology, that was our response to water having trouble sitting in a particular place. Go to Omuma road phase 2, they are clearing that road now, you will see pawpaw trees and other things flourishing on the road. That was how Osusu road was. If you want to work on Osusu, there’s no how you will put just laterite and overlay on the road and expect it to last for a long time. So we introduced the rigid cement technology and I can name the roads where it was used. I’m doing that so we can recover our cities. If I did only 10 roads, I expect my successor to start from road number 11 and with that, we can recover our roads instead of throwing away the State’s money.

This will give you an insight into the way I think. Doing all these requires resilience and deep thinking. Unfortunately, our people are impatient. They like the dining table but do not know what’s happening in the kitchen. It has taken me four years to do Aba-Owerri road because I had to take away the water that usually sits at Ngwa High School. I spent N30 million doing palliative work there and I swore I won’t try that again. I asked where the water will be channelled to and I was told it will be at Rhema University which is about 3 kilometres. Just to take away the water at Ngwa High School, I did the drainage which solved the problem of flooding at the Anglican Church and Ngwa High School.”

Further speaking on the impatience of Abians, Governor Ikpeazu made it clear that he has always had a clear direction when it comes to recovering the road networks of the State. He revealed that visiting the Southern areas of Aba gave him an insight into the suffering of people and he swore to make it better. He stated that he never gave up until he found a solution to solve some of the problems plaguing roads in Abia State.

“In 2015, I undertook this job with a lot of passion and emotional pain. Pain arising from the pain that no leader can do everything. I recall on a Saturday when I returned from Church, something was nudging me to Amamuo where we have Obohia, Ohanku, and Ngwa roads. I drove myself there, at a point, I parked somewhere and was working along the road and started shedding tears. From the map, you can see that water was threatening the window level of the houses along the road both right and left. All you will be kicking with your feet was dead rats, fowl and all that. I told them that I will return on Monday and Monday, that’s 2 days afterwards, I was there. For 60 years, nobody has done any road in that area but now, we have about 5 or 6 roads we have done there. I cannot advertise those things. Those who are top-heavy know that if you book AIT live, they will tell you 100 million and that money can give me one more kilometre. We are dredging from sub DBC, I am partially the reason why I am not prominent in the media space which I will do something about.”

Governor made it clear that no leader can finish the whole problems of a State but promised to keep working till his last day as Governor to better the life of Abians.