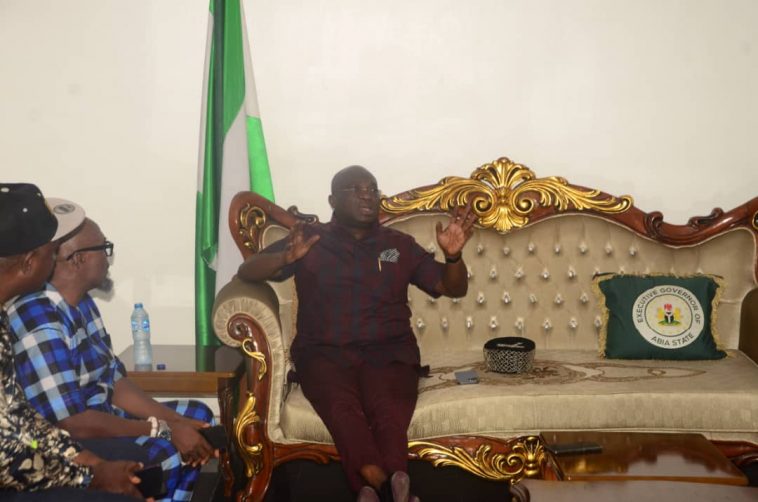 The Governor of Abia State, Dr Okezie Victor Ikpeazu has admonished the media to be objective in its reportage as the survival of the State and country in general, lies in the hands of the media.

“You hold a very powerful tool that can make or mar this country. Today in this country, you can no longer send your children to school and forget the children of your neighbour. They will kidnap your children. The greatest safety is the love you share with people around you. You are perception managers. You drive society either way. You can push society forward. If you are not careful of who you promote, and what you promote, you might unknowingly promote something that will throw off society or cause one to commit suicide or something that will undermine you. Objective journalism means that no one statement is completely right or wrong. You can sift out what is good in an individual and promote it, and then that will be good. You can also say something is bad.”

Speaking to members of the Online Media Practitioners in Abia State at the Governor’s lodge in Aba on Saturday, he cited the Rwanda genocide stating that millions of people were killed based on the reportage and positions of the media.

“In the Rwanda museum, there are cut-out stories and pictures of journalists who contributed to the genocide in one way or the other through their writing and positions. Whether we will continue as a country or Abia will grow is in your hands. A few months ago, Abia was number 3 in foreign direct investment. Check the statistics of the poverty index rate and GDP, check where your State stands despite all the nonsense people say. When you demarket your State, you forget that you will write your State of Origin on your curriculum vitae.”

Dr Ikpeazu made it clear that news stories must be objective, pragmatic and neutral stating that the essence of leadership is to solve problems and not for social media accolades. He made it clear that he wasn’t bothered about what people write about him but strongly stated that posterity and history will be kind to him.

“I’m not bothered about what people say about me especially on social media, as much as I advise you to be as professional as possible, I know that both the traditional and new media can be hired to assassinate somebody. Some people also design to distract a person thinking that by distracting the leader so thag the leader will be kept busy and will not actualize anything. Which is the most wicked thought that a person can have. The strength of a State is equivalent to the weakness of the vulnerable in the State. When you say you are distracting a leader, you are also speaking evil to the downtrodden. That person might be doing it to rise but he/she is doing it at the expense of the vulnerable. For me, I chose not to be distracted by the antics of people. I don’t care so much about the noise, I can thrive amid the noise. If I want to be sarcastic, I would say for a young man who had a PhD at 29, I had all the distractions but I had a driving force which propelled me to my goals. What drives me now is making life bearable for the downtrodden. I’m a man of a strong conscience, each day I close my book at the end of the day and about to sleep, I ask myself if I’ve offended anybody or have not done what I’m supposed to do. I’m humble enough to go back and apologize for no matter the person.

Your profession that’s why you are protected in our Constitution even during the time of war. A politician that hires you to write something that’s not true about others can never trust you. This is our place and Abia is strategic to the survival of Ndi Igbo. So we should be mindful of what we say or promote. If you can’t protect Abia, try to be as objective as possible.
I never promised I’ll do everything but I’m ready to be judged by what I’ve done so far. In doing so, I will submit myself to the verdict of history and posterity because there are things you can’t take away from me.”

Speaking on his achievements, Dr Ikpeazu stated that taking his job in 2015 came with a lot of pain as there was no compass for building Abia. This pushed him into developing the Abia State’s long-term developmental plan.

“You can’t take away the fact that this government gave Abia its first long-term developmental plan. Aba, Umuahia had no master plan. That’s like flying an aeroplane without a compass.

I want to solicit your support and assistance especially as we are going into politicking, I’ve run elections against one politician. The media promoted the politician as being wise and having solutions to virtually all problems but when you go to the records of this politician in INEC, you won’t see where this politician worked before. It’s completely deleted. Then in the present dispensation ‘revolution is coming’ ‘greater Abia is coming.’ How? And he will campaign for six months and will never say how. That’s how we found ourselves in this time with the federal government. It’s scary. So whether we will survive or not is first on leadership and then on the media. In building the flyover, I solved a problem there. I connected all the major markets in Aba which added to the GDP of the State. If you know those traders without shops, they will die if they cannot easily use a tricycle to buy something and present it to you. They will serve you soft drinks and tell you they want to get a product from the next shop but run to Ariaria, buy it and give it to you. And they will make a profit. That’s my vision there. Connect the whole markets and promote Trade and Commerce in the State. Not sounding immodest but my interventions are uncommon, they might not be visible to the pedestrian thinker but one day, a philosopher king will come and will realise that a man like me came around.”