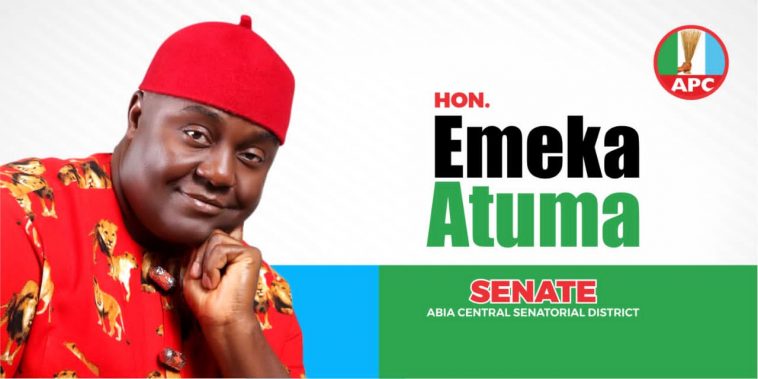 In the Quest for 2023 Abia Central Senate bid, Hon. Emeka Atuma the APC Abia Central Senate candidate stormed Isiala Ngwa North LGA for a consultation and Familiarization visit and tasked the party supporters to remain united and resolute to win the forthcoming general election as a party.

Hon. Atuma had asked the people of Isiala Ngwa Local Government Area to remain resolute in the party and support candidates for the 2023 general elections.

Addressing some Stakeholders in the area at the Mbawsi the Country Home of Abia State Former Speaker Rt. Hon. Martins Azubuike hosted the Party Stakeholders and Party Faithfuls.

He stated clearly to the party this was time to work hard and win the election for the party to grow.

He assures the party this is the time to show capacity and cooperation among themselves.

He appealed to eschew all manner of rancour and go into the grassroots and bring more people to support the Party.

The APC candidate thanked the party faithful in Isiala Ngwa North for coming out en mass and assure them he will offer Quality representation to the people of Abia Central Zone.

Hon. Atuma emphasized that it was very important to vote for all party candidates in all elective positions.

He reiterated that the elective position which he is vying for the people.

Meanwhile, the former APC State Chairman Hon. Donatus Nwamkpa, thanked the party faithful and assured them that APC is one and they are working also as members of the reconciliatory committee to make sure of inclusiveness in the party.

He also told the party that Rt. Hon. Martins Azubuike is part of the reconciliation committee.

RT. Hon. Martins Azubuike reaffirmed to the party faithful that APC have come to change the bad government that kept them in dark.

The APC Isiala Ngwa North Party Chairman also thanked the campaign team and the party executive and promised that they shall remain one in the party even ‘if he is asked to step down in the course of reconciliation.’