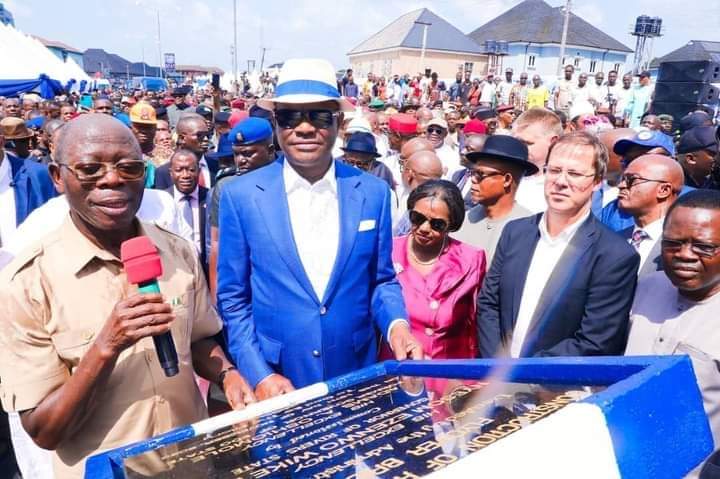 Rivers State Governor, Nyesom Ezenwo Wike has reiterated that the Peoples Democratic Party (PDP) G-5 governors will only be disposed to reconciliation based on equity, fairness and justice.

The Rivers State governor asserted the inauguration of the Rumuepirikom Flyover, the 8th so far constructed and completed by his administration. The project inauguration was performed by Comrade Adams Oshiomhole, the former governor of Edo State, on Wednesday.

Governor Wike pointed to how, before the crisis rocking the PDP, some members of the party were singing praises of him and his colleagues that make up the G-5 governors. But he noted that the same people have turned around to call them names because they are clamouring for equity, fairness and justice.

“I’m sure, those of them in my party, before, cannot say anything without mentioning Wike. But now, because I said let the right thing be done, let agreement by agreement. Because I have said that, I have now become an enemy. These were people who were praising my morning, night, or any day.

“But because we said, look, we had an agreement, do this, do that, and some people believe that they will not and we said it must be done.  We stand for equity, fairness and justice. That is what the G-5 Governors will continue to preach. We have said we are not against reconciliation, but reconciliation must be based on equity, fairness and justice.”

Governor Wike said politics is about interest and Rivers people must be sure of what they stand to benefit from any support they will have to give ahead of the 2023 general elections.

Governor Wike drew attention to the place of integrity in leadership across strata and why leaders must be bonded by what they say and do.

“When once you have lost integrity, there is nothing you can offer again. And that is the problem we are having in this country where politicians will stand up and make a statement.

“And then, people are watching you fulfil that statement, promise you have made and when you don’t, Nigerians will now say that is how politicians behave. I don’t agree with that.

“Individuals can behave that way, I will not behave that way. If I say something today, I will do it. If there is any reason I won’t do it, I have to come back to you and let you know this is the reason why. And that is what they call integrity.”

He called on leaders across strata and divides to promote unity among Nigerians. According to him, the expected unity should be devoid of ethnicity, religion and party considerations but based on the fact that one is a Nigerian.

Governor Wike decried situations most people are made to experience, which often make them question their nationality as Nigerians. He said, it is unfair for some Nigerians to lord it over others on an unequal stance, a feeling that negates unity and progress.

The governor also seized the opportunity to offer a public apology to Comrade Oshiomhole over some political comments made against him and the governorship candidate that he supported in the last Edo State gubernatorial election.

“You know I came to Edo State to make sure your candidate didn’t win the election. I was virtually in charge, every day coming out on television to take you on, and I said you will not win, and you didn’t win.

“Well that assignment has been done, we now know who is who. I want to tell my people, I sincerely apologise to you and you know, each time you (we) learn.”

Commenting on the project, governor Wike noted how the people had cried over the inconveniences they had suffered while the construction work lasted. But with the Rumuepirikom flyover now completed and inaugurated, governor Wike observed that people are happier that their sacrifice was worth it.

Governor Wike instructed Julius Berger Nigeria PLC to return to the Rumuepirikom community and make sure all roads are reconstructed in the area.

Performing the inauguration, former governor of Edo State, Comrade Adams Oshiomhole noted with pleasure the belief by governor Wike that in a democracy, though political parties are needed to win elections, promises made to the people must be kept and projects delivered as proof of governance.

“I think, Rivers people should be proud because our people often say that prophets are not appreciated at home. Governor Wike has truly transformed this city.

“So, sir, the truth is that I have heard anyone who can say with some measure of confidence that governor Wike, his own na just talk. You talk, you walk the talk.

“In politics, I can’t come to this place when we want the votes and begin to celebrate you. If I celebrate you like our President Buhari has celebrated you now, and you’re using the certificate to make the most potent campaign against my party what can we say?”

Comrade Oshiomhole, who was also a former National Chairman of the All Progressives Congress, APC, commended Governor Wike for using his time in office as governor of Rivers State to make a difference.

“Facts are very stubborn. So, I agree that even your worse critics will admit that governor Wike has made a difference. You made a difference not only in terms of projects but even your statement this afternoon, I join you in saying this because I had the course to say that in Benin when I was governor of Edo State that how can a country be governed by people who cannot be trusted?

“When politicians make statements, make promises or even make agreements or even enact laws and the laws are not to be obeyed by themselves but to be obeyed by others and when they default in their promise or standing, they say that is politics for you.

Providing the description of the project, Rivers State commissioner for Works, Dr George-Kelly Dakorinama Alabo said the Rumuepirikom flyover is 820 meters long, has a width of 26.8 meters, two approach rams of 110 meters each, and 600 millimetres walkway on either side and 600 millimetres median.

He stated that the flyover is designed to last, will reduce time spent in traffic, and improve the socioeconomics dynamics within the benefitting communities in addition to the enhanced value of property in the area.