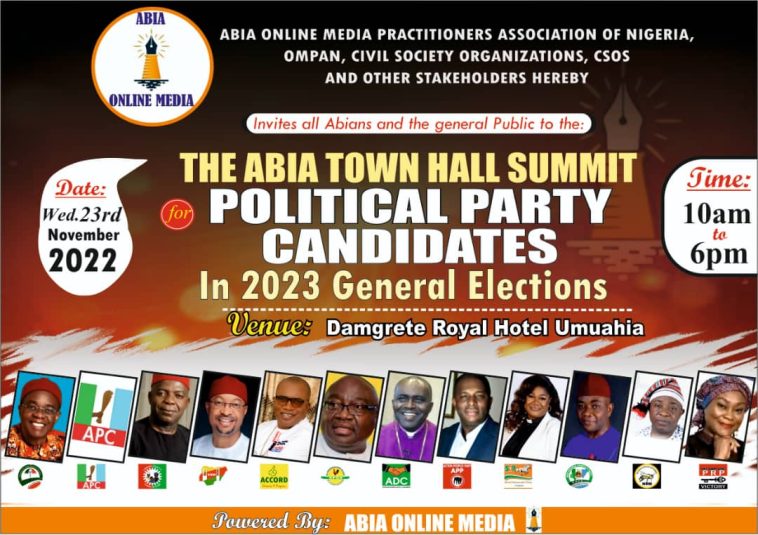 Chief Ijomah Ukeh, the governorship candidate of the National Rescue Movement, NRM,  who spoke on his vision if elected said he will re-ignite the extreme intelligence and industrious human resources for which Abia is noted, to elevate the socio-economic fortunes of all Abians.

In her remarks, Barrister Lancaster-Okoro of the Peoples Redemption Party, PRP’s governorship hopeful lamented that Abia has fallen from its dominant position and promised a reversal if elected.

“I am coming to give women and youths a better chance…a pride of place to women and a future for the youths”, she proffered.

The Abia Town Hall Summit, planned by the Abia Online Media  Practitioners Association of Nigeria, OMPAN  is empowered by Section 22 of the 1999 Constitution as amended, which stated that “The press, radio, television and other agencies of the mass media shall at all times be free to uphold the fundamental objectives contained in this Chapter and uphold the responsibility and accountability of the Government to the people.” to facilitate the town hall session

The programme would involve all governorship and National Assembly candidates from all the parties in Abia seeking offices in the 2023 General Election.

OMPAN chairman, Chief Paddy Anyatonwu has earlier stated that the programme would hold on Wednesday, November 23, 2022, beginning at 10 am in three sessions at Damgrete Royal  Hotel, Umuahia and would be broadcast live on radio stations and will be streamed to over 34 Online newspaper platforms and other social media arms reaching millions of Abians worldwide.