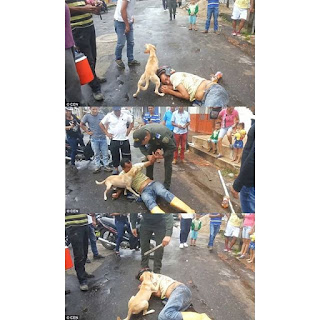 A loyal dog prevented angry motorists and police from waking up its drunk owner who was sleeping off a hangover in the middle of the street. In the footage, filmed in Colombia, the pooch laid on top of the man and barked at anyone who came near him. The dog also paced around his body in a circle to try to protect him.

As one onlooker tried to shake the man and wake him up, the dog sprung into action and barked at him until he backed away.
Seconds later a policeman approached to deal with the disturbance, but finds that the protective pooch will not let him anywhere near its drunk owner.Eventually, the owner wearily woke up and gave his beloved dog a loving pat before getting a ticking off from the cop.