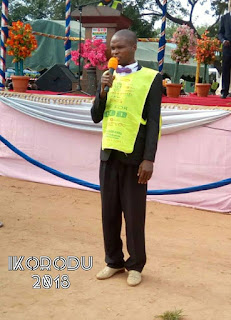 As written by the Lord’s chose member, he disclosed how the chosen ring tone saved him from the ritualist den.

HOW GOD DELIVERED ME FROM RITUALIST DEN.

” A CHOSEN RINGING TONE ON MY PHONE, ‘The God Of Chosen Answers Prayer’ SAVED ME FROM THE HANDS OF RITUALIST”

My name is Bro Maynus Francis Chukwuekezie. I joined Chosen in March 2008 during the program titled, ” GOD HAS THE ANSWER”
I lives in Ikorodu area of Lagos, but I am working in Ogun State.

It happened that on Friday morning, I boarded a bus to Oshodi, but the bus stopped at Toll Gate and the driver asked all of us to come down and board a bus with the two mobile police standing by, which we all did, on getting to Meron bus stop, the driver diverted to the right. I asked him, where are you going? he answered and said that he was dodging from Abule-Egba traffic, and that was all I knew and could remember before I became unconscious.

When I regained conciousness , I saw my self in a big hall inside the forest. I haven’t declared who I am by the time all these where happening.
Those inside the bus with me weren’t aware of what was going on because they haven’t regained conciousness by that time. Inside the hall, I saw skulls hanged up and down, and also people that were naked with their undies on.

As I was inside the hall, I began to ask myself where am I? And one of the police heard it and told me to shut up, that I am very stubborn and that very soon my skull will hang like others over there, which I rejected by saying God forbid, my skull cannot hang there. They seized my phones and properties with me and took it into their office.

After the argument, my phone began to ring, and it was singing ” The God of Chosen answers Prayers” so they began to fight themselves and there was confusion inside their office, they brought out the nylon bag into the hall and threw it on the floor, asking “who brought this thing here”? And I answered, it is my phone, and it was returned to me.
After the phone was returned to me, their boss came out angrily and said that you people should be looking at face first before you bring people here, and he ordered them to take me away with the same bus that brought me, that was how I came out of their den unhurt.

I was dropped where I can get a bus back and then someone directed me to a Deeper life pastor who helped me back to Lagos.
When I asked someone where I was , I was told it was Ondo State.

My advise to others is to follow the G.O’s word and direction to declare whom they are whenever they encounter danger. If not for my phone that spoke for me, I don’t know where I would have been by now.