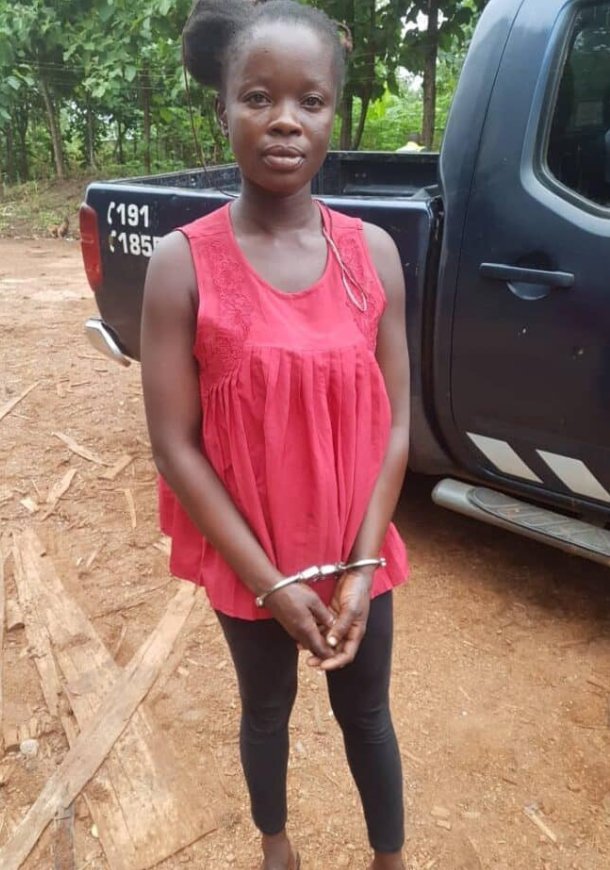 The Police in Ghana have arrested a 27-year-old hairdresser, Hilda Asumani for stabbing her boyfriend to death.

It was gathered that Hilda stabbed her boyfriend with a scissors over a grass cutter soup.

The incident which happened at Abesim in Sunyani municipal on Tuesday morning, June 8th, left many in shock as eyewitness report that few days earlier, she accused him of cheating on her.

The deceased, Prince Yaw Aboagye, 30, was found lying lifeless in front of their room in a pool of blood with multiple wounds on his neck and chin.

The deceased, Aboagye, popularly known as Engineer, was said to have been in a relationship with the suspect for about six years and had a child.

A police source said that the two lovebirds engaged in a heated quarrel after the deceased denied the suspect a grass cutter meal he was eating.

Hilda, a mother of two, allegedly stabbed Aboagye four times on the neck and chin and sensing danger, tried to stop the blood that oozed from the wounds with a bedspread.

According to some co-tenants who spoke to journalists, the couple had been having heated argument and fights for some time now.

A resident who pleaded anonymity said Hilda and her boyfriend had a misunderstanding last Sunday, June 6, after she suspected him of having an affair with another woman.

Hilda seized his phone later and that led to a squabble which was later resolved though she refused to give him back his phone.

The body has since been deposited at the Bono Regional Hospital for postmortem while the suspect is assisting police in the investigation.