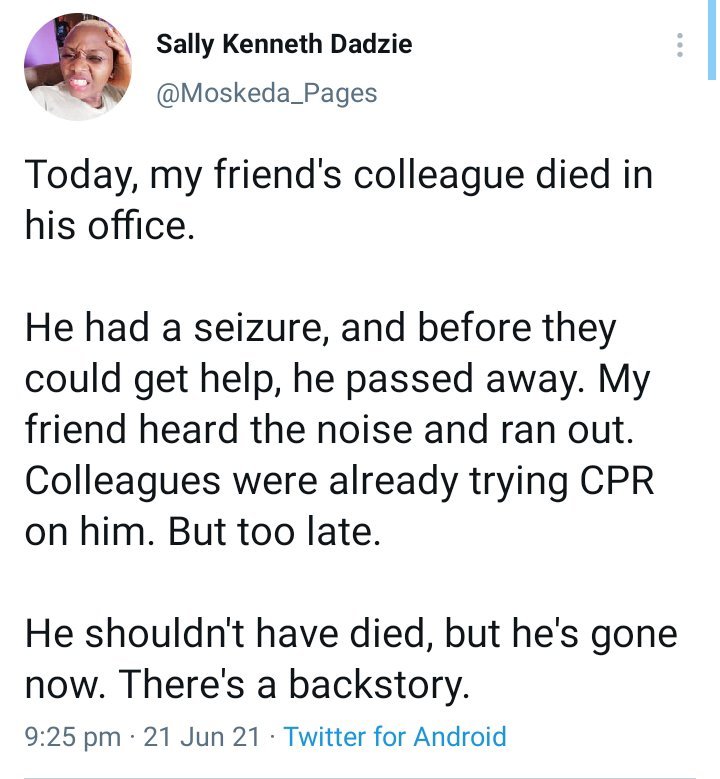 A sad incident has happened in an undisclosed company in Lagos State after a sick man passed away in his office.

It was gathered from Sally Kenneth Dadzie who shared the story that the man died after suffering a seizure while in the office.

According to the post, the man had been sick but the employer did not believe his explanation and he came to work without getting a proper medical attention.

“Today, my friend’s colleague died in his office.

He had a seizure, and before they could get help, he passed away. My friend heard the noise and ran out. Colleagues were already trying CPR on him. But too late.

He shouldn’t have died, but he’s gone now. There’s a backstory.

On Friday, he came to work late, and his boss was mad at him for being late. He tried to explain that he was ill, but madam wasn’t taking it. People who saw him attested to the fact that he didn’t look well. Yet, his boss didn’t care. She berated him in front of other staff.Today, he came to work, looking worse. Someone saw him and asked why he was at work. He said he wanted madam to see him cos she thought he had been pretending. He wanted to take excuse from her. Unfortunately, madam wasn’t at work. So, he started working, waiting for her.

Well, she never showed up. While seated, he started seizing. A colleague saw him and called the attention of others. None of the staff had training for First Aid. They did the usual of forcing his mouth open, trying to pour water on him, etc.

There was no First Aid kit, no medical personnel around. When they got to hospital, they declared him dead on arrival. There was nothing the hospital could do for him.
Na so the man go. Just like that. Just another day at the office 

They had to call his wife and daughter from out of town to come and get him. Being that he was a Muslim, he had to be buried immediately.

Imagine sitting at home and getting a call, letting you know that your husband/dad died at work. Death that could have been avoided.He didn’t see a doctor during the weekend because he didn’t have funds. The organization had stopped the employees’ health insurance for no reason awhile back. The man had family to take care of. His health was the least of his concerns. He prolly thought he’d feel better soon 

Dear bosses,
Please, listen to your staff. Be invested in their welfare. Ensure you register them for health insurance. Have emergency medical care available in the workplace. Get experts to teach your staff basic first aid skills. It might save your own life some day.

Workers,
Please, don’t play with your health. Regularly check your blood pressure. Don’t overlook those headaches and “small” fevers. Look out for your colleagues. Follow the doctors here for information on health care and what to do when someone needs first aid.

Meanwhile, the late man didn’t even need to be at work cos it’s the audit dept and they could work from home. But madam, who didn’t always show up wanted her staff to be on seat every time.
Boss from hell 

To the man who lost his life, may his soul find peace ”