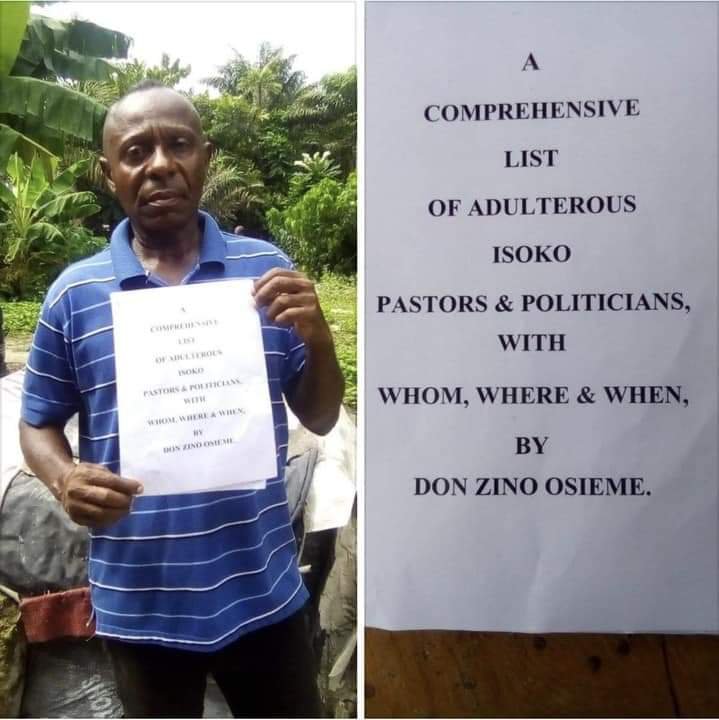 A church Bishop identified as Don Simon Osieme has compiled a list of adulterous pastors and politicians across Isoko land in Delta State.

A statement that he released on social media revealed that he was ready to publish the list immediately after his children arrive safely in Texas, the United States of America.

According to Simon, he made the list after preaching against the act that is considered attempted murder in the land.

He also revealed that the list shows the pastors, politicians and the people they were with, when and where.

ADULTERYMANIA SAGA VS THE HIDDEN EYES

Adultery by a wife in Isoko tradition is attempted murder and in some cases very close to me, first degree murder.

Therefore, any man that consciously have sex with another man’s wife has deliberately attempted murder or committed murder

After so much preaching against adultery in Isoko, I started a socio-physio-tele-audio-spiritual investigation that can convince and satisfy any very critical jury to give a guilty verdict against any culprit
DON ZINO NO DEY FEAR YOU

More than enough evidence. A prominent pastor has been having sex with underage girls. Pictures available
This bomb will be released as soon as my children have arrived in Texas safely.
No current Isoko House of Assembly Member is on this list. . The pastor that had sex with an Olomoro prince’s wife Last year is not included because he paid the mandatory adultery fees, goal, plantain, yam and other requirements and he didn’t deny. Case closed. No dead political leader is documented

I have not and will not reveal these painstaking documents to anyone. Do not say I told you
This is not a hand grenade. It is not a landmine.
It is a dragon bomb. If we don’t do this, no married woman is safe in Isoko because they are using potent charms