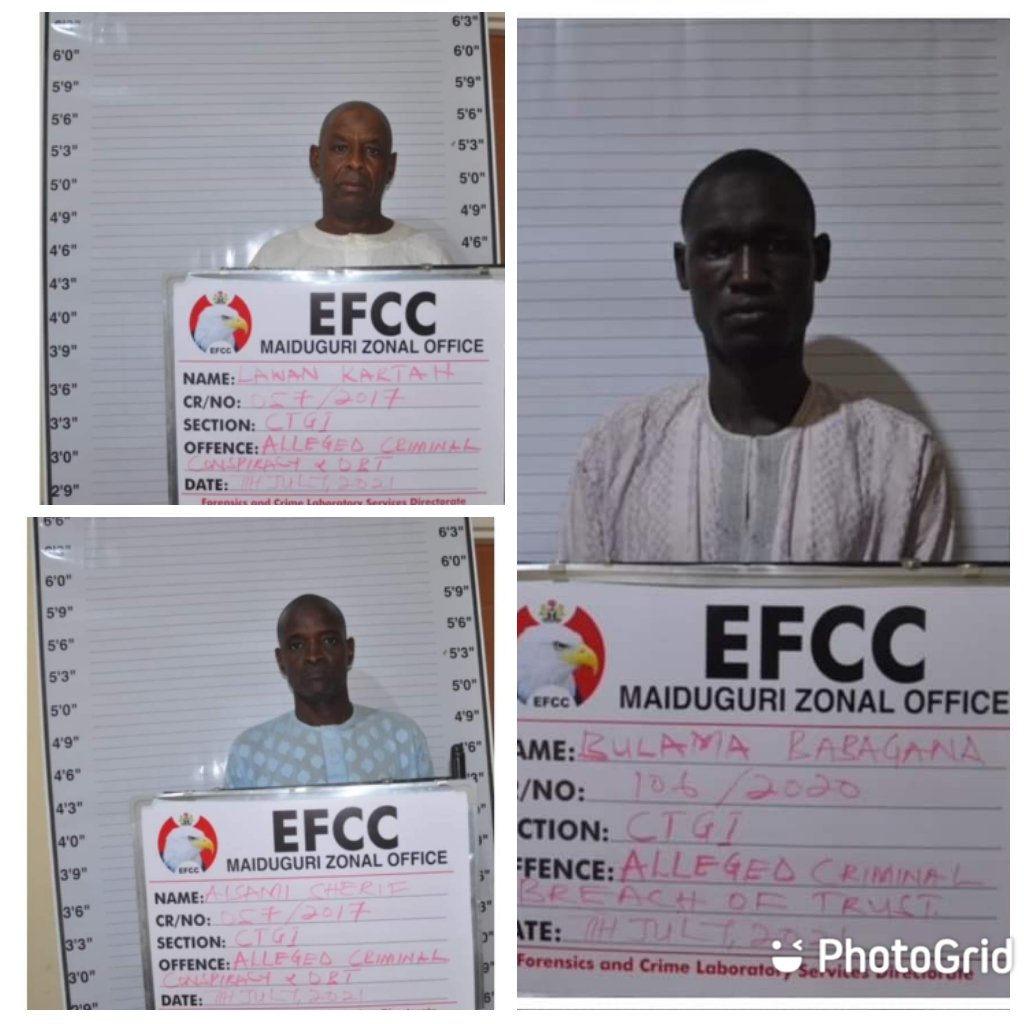 Karta and Sherif were jointly arraigned on a two-count charge for allegedly selling a purported plot of land to one Mohammed Umar Bolori in the sum of N10, 000, 000.00 (Ten Million Naira).

Investigation revealed that the complainant deposited N5, 000, 000.00 (Five Million Naira) to one of the defendants’ accounts during his visit to the land. Afterwards, his attention was drawn to the fact that the plot of land belonged to one Alhaji Abba Kagu Marte and all efforts to retrieve his initial deposit failed.

Count two of the charge reads: “That you, Lawan Karta, Aisami Sherif and one Alhaji Goni Abba Umar (now at large) sometime in 2017 at Maiduguri, Borno State within the jurisdiction of this Honourable Court with intent to defraud induced one Mohammed Umar Bolori to deliver to you the sum of N5,000,000.00 (Five Million Naira) only under the false pretence that the said sum will be used to service his interest in buying a plot of land situate and located at Moramti Area, Maiduguri, Borno State, facts which you knew to be false and thereby committed an offence contrary to and punishable under Sections 1(1)(b) and 1(3) of the Advance Fee Fraud and Other Fraud Related Offences Act, 2006”.

Meanwhile, Babagana Bulama was arraigned on one-count charge for allegedly refusing to pay for the goods he purchased on credit from one Joel Jediel Yerima to the tune of N3, 010,500 (Three Million Ten Thousand Five Hundred Naira)

The one count charge reads: “that you, Babagana Alhaji Bulama, sometimes in 2019 at Maiduguri, Borno State within the jurisdiction of this Honourable Court, did dishonestly misappropriated the gross sum of N3,010,500 (Three Million and ten Thousand Naira) only being the value of ; (1) Three Hundred and Thirty Nine Bags of Okro (2) One Hundred and Eighty Bags of Beans, (3) One Hundred and Sixty Bags of Beans Chaff, all belonging to Dr. Joel Jediel and thereby committed an offence contrary to Section 308 of the Penal Code Cap. 102 Laws of Borno State of Nigeria and punishable under section 309 of the same Law”.

The three defendants pleaded ‘not guilty’ to the charges preferred against them.

Upon their plea, prosecution counsel, Muktar Ali Ahmed asked for trial date and urged the court to remand the defendants pending the determination of their cases.

Justice Fadawu adjourned Karta and Sherif‘s case till July 26, 2021, while Buluma’s case was adjourned till July 28, 2021, for commencement of trial.

The defendants were remanded in Maiduguri Medium Custodial Centre.

From the desk of EFCC