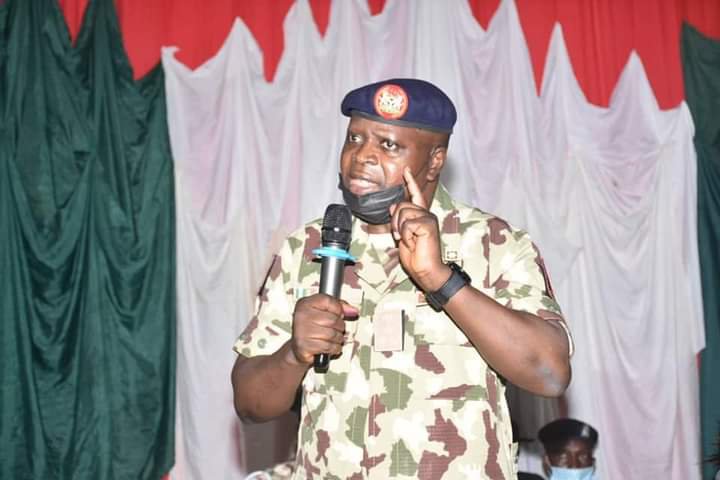 Ibrahim said this on Sunday during his official visit to Plateau State Orientation Camp in Mangu to the 2021 Batch ‘B’ Stream One Prospective Corps Members.

He also advised the corps members to be security-conscious and mourned the death of the five Prospective Corps Members that died recently in an auto-crash along Abaji/Kwali on their way to report at the Orientation Camp in Katsina State.

He said the NYSC Scheme was established for the promotion National Unity and integration.

Ibrahim stated this today while addressing the 2021 Batch ‘B’ Stream One Prospective Corps Members during his visit to NYSC Plateau State Orientation Camp in Mangu.

The Director-General also urged them to use the service year to build teamwork and preach against Nigeria’s break-up.

“Take advantage of the Orientation Course to foster unity, national integration and peaceful co-existence. NYSC was established to promote national unity and the Scheme will continue to live up to its mandate,” he said.

Speaking further, lbrahim appealed to the Prospective Corps Members to respect dignity of labour, have vision for excellent performance and drive it with passion.

He warned them against social vices saying, “Avoid cutting corners, respect the law, do the right thing and maintain good integrity. Avoid cyber crimes, drugs and don’t allow any of your actions today haunt you tomorrow,”

General Ibrahim advised the Prospective Corps Members to be security conscious and adhere strictly to the security tips given to them in the camp by not exposing themselves to danger.

He cautioned against embarking on authorized journeys, and advised that they must obtain permission from the NYSC if it becomes compelling to travel.

During the visit, a minute silence was observed in memory of the five Prospective Corps Members that died recently in an auto-crash along Abaji/Kwali on their way to report at the Orientation Camp in Katsina State.