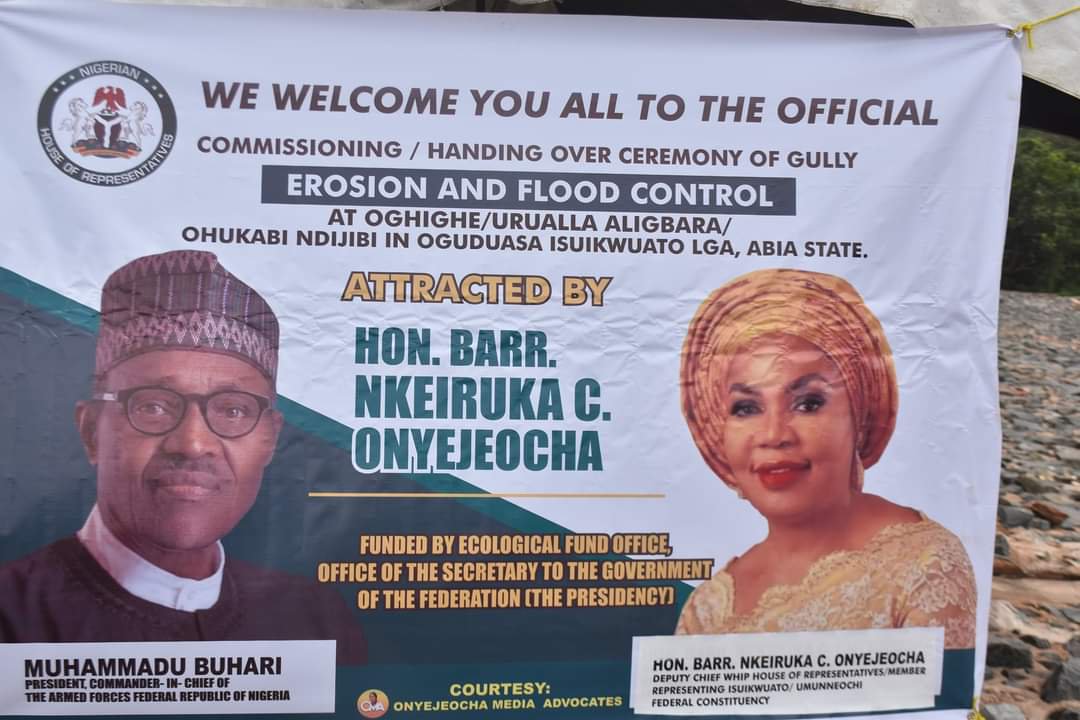 The President was represented in the occasion by the member representing Isuikwuato/Umunneochi and Deputy Chief Whip of the House of representatives Hon. Barr Nkeiruika Onyejeocha, who doubles as the facilitator of the project.

Speaking during the Commissioning, Permanent Secretary, The Ecological Fund Office, Mrs Habiba Lawal represented by a Director in the Parastatal Mr Collins Igwe, thanked the Secretary to the Government of the Federation (SGF), Boss Mustapha for assenting to the various projects that has continued to improve the lives of Nigerians.

She traced the genesis of the project which according to her was initiated “through a request for an urgent Presidential Intervention forwarded by your daughter, the Deputy Chief Whip, House of Representatives, Hon. Nkiruka Onyejeocha in order to arrest the continuous erosion, flooding and other ecological devastations within and around the impacted communities.”

“The commissioning and handing over of the project to the benefitting communities is to serve the dual purposes of enabling the host communities to take over and exercise ownership over the project and to ensure its maintenance and sustainability.”

“These efforts will ensure that the resources which the Federal Government had committed to project will not be allowed to waste” she concluded.

Also speaking, the President General Isuikwuato Development Union recounted the ugly experiences motorists and commuters had on that road, the high rate of kidnapping and banditry that thrived in the area due to bad spots that slows vehicles down and thanked Hon. Onyejeocha for rising to the occasion when it mattered most and standing in the gap for the people.

Hon Onyejeocha who represented President Muhammadu Buhari stated that the “reconstruction of these erosions sites has not only forestalled those ugly experiences, as enumerated by the President General and made life easier for both inhabitants of the area, but also saved arable farm lands from a rampaging Landslide and and reduced, if not totally ended the activities of criminals within the area….”

She commended the Contractor Foldams Engineering Company Nig. Ltd, not just for a job well done at the Erosion site, but for going out of his way to do palliative jobs on other sites not included on the project proposal and doing so pro bono, a gesture that is rare in our clime today.

Hon. Onyejeocha also lauded the staff of the Ecological Fund office for their professionalism and patriotism in seeing that the project was fully funded and supervised till completion and expressed hope that her other pending requests in the agency will also be given a speedy assent.

She relayed Mr President Goodwill message to the good people of Isuikwuato Umunneochi Federal Constituency and Abia at large, stressing that the only way genuine development can reach the people in the rural areas and hinterland is when politicians and public office holders put their party leanings aside and place service to the people first, synergize with each other to maximize development potentials.

She made a firm promise to the people that she will never relent in her poise to ensure that the entire landscape of her constituency is dotted with visible evidences of her representation.

Highpoint of the event was the installation of the chieftaincy title on Hon Barr Onyejeocha as the Adadioranma 1 of Isuikwuato by the traditional Rulers from the local Government, for her evidence based representation.