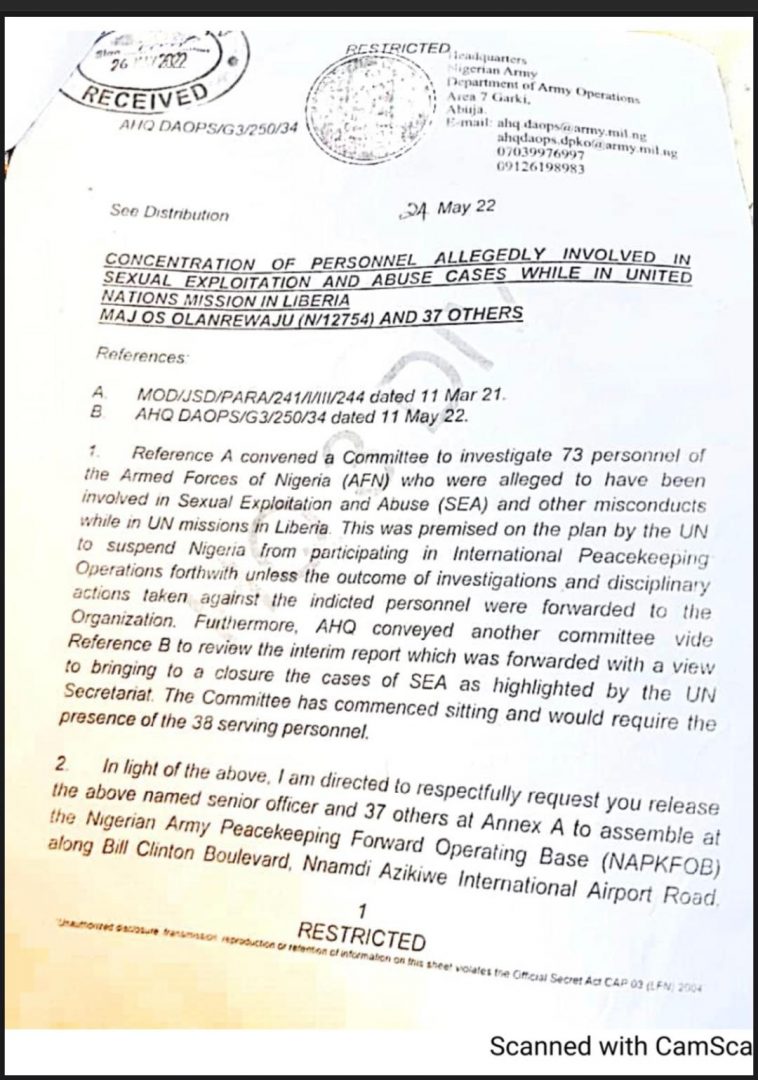 About 73 Nigerian soldiers who were deployed to Liberia under the United Nations Mission in Liberia (UNSMIL) peacekeeping missions are currently under investigation by the Nigerian Army authorities for alleged sexual assault and exploitation.

UNMIL was established in September 2003 to monitor a ceasefire agreement in Liberia following the resignation of President Charles Taylor and the conclusion of the Second Liberian Civil War.

In a list exclusively seen by SaharaReporters, the accused personnel include two Majors. Five of them were also said to have died while six are ex-soldiers dismissed by the army authorities after returning from Liberia.

The United Nations has in the last few years been badly shaken by the wave of allegations of sex abuses by the troops it deploys in missions with a clear mandate to protect civilians.

Under UN rules, it is up to the country that contributed the troops to investigate and prosecute those accused of misconduct while serving under the UN flag.

Sources stated that four years after the last batch of Nigerian peacekeepers deployed to Liberia were withdrawn, the army authorities refused to investigate and prosecute the 73 personnel accused of misconduct until the UN threatened to suspend the country from participating in further international operations.

“According to the new rule, UN is expected to expel entire peacekeeping contingents whose soldiers face sex abuse allegations if no action is taken by their countries to investigate or prosecute them,” one of the sources said.

In a letter sent to all commanders of various operations, which was exclusively obtained by SaharaReporters, the Chief of Army Staff, Lt Gen Farouk Yahaya asked them to release all the accused officers for investigation.

“Reference A convened a committee to investigate 73 personnel of the Armed Forces of Nigeria (AFN) who were alleged to have been involved in sexual exploitation and abuse (SEA) and other misconducts while in UN missions in Liberia.

“This was premised on the plan by the UN to suspend Nigeria from participating in international peacekeeping operations forthwith unless the outcome of investigations and disciplinary actions taken against the indicted personnel were forwarded to the organization,” part of the letter read.

Speaking, a UN staff said, “Even if the women say they consented to the act, it does not free the soldiers from the crime. These soldiers are in a position of authority and in a position where the women could hardly resist them. So, they had no right to touch any woman.

“This case of sexual abuse is serious disloyalty on the part of the soldiers and a failure of the system. They were asked to protect the women and instead of carrying out that responsibility, they resorted to sexually abusing them. It is very bad. It is morally wrong and professionally unethical.”