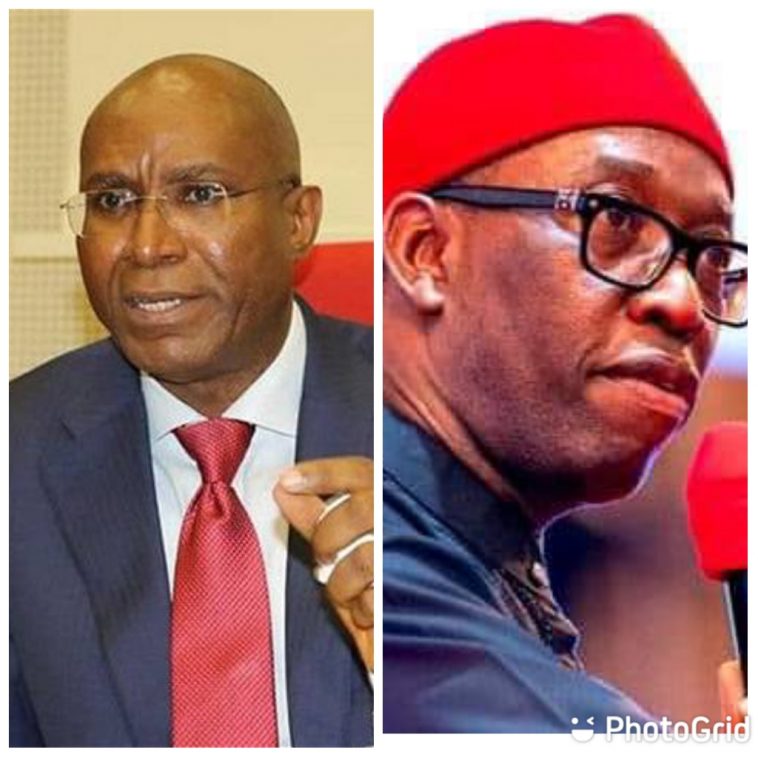 The Deputy President of the Senate, Ovie Omo-Agege has warned Delta State Governor Dr Ifeanyi Okowa against using the State money to fund the presidential campaign of the People’s Democratic Party, PDP.

Omo-Agege, who is a member of the ruling All Progressive Congress, APC, stated this on Friday, just a day after Dr Okowa emerged as a running mate for Alhaji Atiku Abubakar in the 2023 general election.

Citing the numerous pensions, gratuities and salaries owed by Governor Okowa, he advised him to join his counterparts in building legacy projects in the State instead of looting the State pulse for the PDP.

“The Delta APC Gubernatorial Campaign Organization has warned the Delta State Governor and Vice Presidential candidate of the People Democratic Party (PDP), Dr. Ifeanyi Okowa not to use state funds to finance Alhaji Atiku Abubakar’s campaign and other political activities.

The campaign organisation said the call became necessary in the light of credible intelligence at its disposal that the 2023 General Election is a PDP conduit pipe to loot the state.

It noted that the use of taxpayers’ funds and collective resources of Deltans to fund personal political ambitions was unacceptable, callous and inhuman.

“This is coming barely 49 days after the embattled PDP candidate, Okowa’s yes-man and Speaker of the state assembly, Rt. Hon. Sheriff Oborevwori or Francis approved a controversial N150 billion loan.

“We have sufficient grounds to suspect that these loans are being taken to prosecute Atiku’s presidential campaign. We will not stand by and watch Okowa impoverish our people in order to enthrone a man who has nothing to offer Deltans in particular and Nigerians in general.

“If Governor Okowa had devoted half of the time he used in pursuing his Vice Presidential ambition to focus on governance, we wouldn’t be where we are today.

“As of today, the government is owing retirees over seven years of gratuities, pension arrears and death benefits while the state goes on autopilot for Okowa to pursue his personal ambition. Most retirees have resorted to commercial tricycle, popularly called Keke, for survival, some are bedridden, others have resigned to fate or even died while waiting for the present administration to pay their entitlements after 35 years of meritorious service to state and country,” the organisation said.

According to the campaign organisation, the path of backwardness and crippling debts which the Okowa government has sentenced the state was undeserved given the huge, abundant human and natural resources that Delta is blessed with.

It therefore charged the governor to borrow a leaf from his counterparts in Rivers, Borno, Ebonyi and other states that are blazing the trail with legacy projects, turning their states into massive construction sites, while paying outstanding gratuities and pensions, rather than take loans with nothing to show at the end of the day.