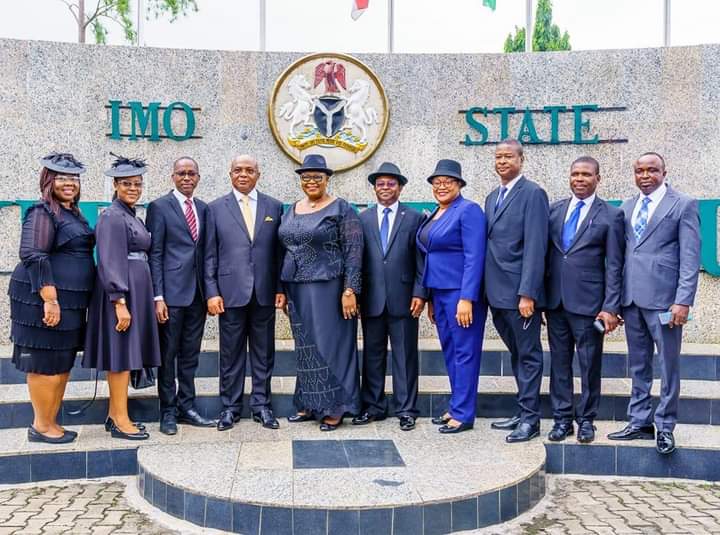 Imo State Governor, Senator Hope Uzodimma has charged the newly sworn in Chief Judge of the state, Justice Theresa Chikeka, the President, Customary Court of Appeal, and the other newly sworn-in judges and entire judicial workers in the state to strive to make Imo State judicial system result oriented by delivering on its mandate of being the last hope of the common man.

Governor Uzodimma gave this charge during the swearing in of the new Chief Judge of Imo State, Justice Theresa Chikeka, the President, Imo State Customary Court of Appeal….and other judges in the state, Wednesday.

While acknowledging the independence of the judiciary, the governor called for synergy between the three arms of government because none of them can function in isolation, as their functions are interwoven.

He urged the newly sworn in officials to go all out and do the job by following the laid down rules, reminding them that their assignment, requires; commitment, sacrifices and inconveniences, to leave up to expectations.

“I will therefore like to invite you. Let us become partners for the interest of our people. Let us agree to move forward. The expectations of Imo people are very high. What people benefit from your endeavour is what makes you a hero and you cannot speak for yourself.

“There must be a time when our system must wake up. The gap between the common
man and the judiciary is now too wide . You can decide today to change to move things forward in the system “.

Uzodimma however testified that for the short period he has worked with Justice Chikeka as acting Chief Judge, she has been a pragmatic person.

He congratulated them and prayed God to guide and lead Imo State to the desired destination.

In a vote of thanks on behalf of her colleagues, the Chief Judge thanked God for the Grace he gave the Governor to swear them in.

She promised that they will abide by the oath of conduct they took and that by “the Grace of God” they “will not fail the Government and people of Imo State in particular and Nigeria in general.”

She assured that she will lead Imo State Judiciary to another level.