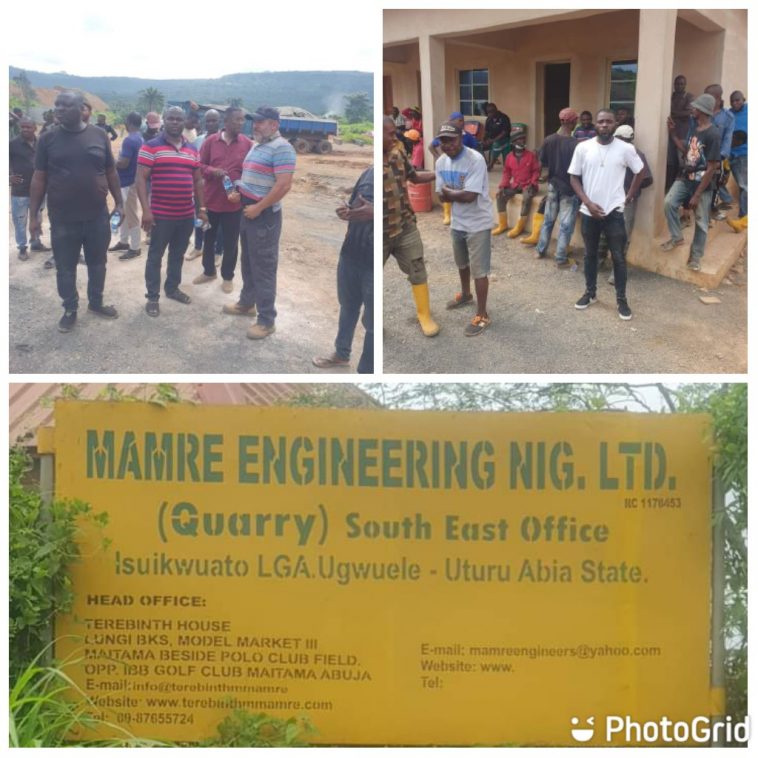 The Executive Chairman of Isuikwuato LGA, Chief Chima Agbaeze has called for a crucial meeting at the Council Headquarters following aversion of a very deadly clash between youths of Ugwuele in Uturu and some companies that operate stone quarries in the community on Friday.

A press release made available on Friday by Eric Dwyse Ikwuagwu revealed that the timely intervention of the security-conscious Chairman of the LGA, through his Eagle-eyed vigilance, was able to detect the fracas and halted irate youths in their numbers, who were armed with all manners of dangerous weapons from destroying lives and property and causing a breach of peace in the granite rich community of Ugwuele.

Trouble began when Memre Engineering Nigeria LTD stopped operations in 2020 due to the covid-19 pandemic. The youths of the community claimed he stopped payment of their agreed monthly returns and decided to lease out Memre Engineering company’s stone pit even though he has 4 years remaining from his 10year lease agreement with the community.

Report has it that Setraco, the new lease holder of the said pit, the authentic lesse holder Mamre Engineering company Ltd and a third claimant, Asphalt Unity Construction company that got lease agreement from same community for the said pit originally allocated to Mamre Engineering company; all laying claim to the said granite pit. The youths of the community took laws into their hands and decided to back any of the three companies based on varied considerations, irrespective of a subsisting Court case which has rendered the matter subjudice, therefore prohibited from public discussion or action pending the outcome of the judicial process.

The Isuikwuato LGA Council boss quelled the disturbing situation, which was already degenerating and summoned all parties to his office for administrative resolution of the matter. Taken into cognisance the volatile nature of such tussle and the readily available dynamite which quarry companies use in blowing up granite pit; it became imperative to settle the impasse amicably and quickly too.

Those who also assisted to forestall breakdown of law and order were Chief Ukeje Ndubuisi, the Traditional Prime Minister/ Regent of Ugwuele; The President General of Ugwuele, Mr. Victor Okorie; the Community Youth Leader, Mr. Samuel Uzoigwe; the CEO’s of both Mamre Engineering and ASPHALT Unity construction company.

The management of Setraco couldn’t be reached before filing this report as calls to their numbers weren’t answered.

In view of the incident, Chief Agbaeze invites the following to a very important meeting at the Council Headquarters, Mbalano.

The President General of Ugwuele.

The Traditional Prime Minister of Ugwuele.

The Youth Leader of Ugwuele.

Note; All are to be seated before the arrival of the Executive Chairman.