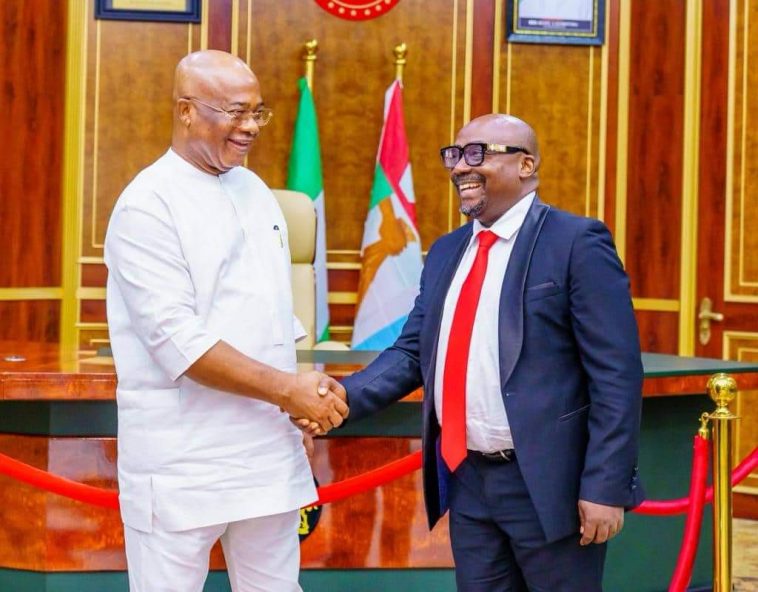 Governor Hope Uzodimma of Imo State, has appreciated members of the state House of Assembly for yet another rancor free change of leadership, with the resignation of the former Speaker, Kennedy Ibe and emergence of the new one, Emeka Nduka, who is now the fourth Speaker of the 9th Assembly.

Uzodimma made this commendation in his address to the newly elected Speaker and members of the Assembly, who called on him at the Government House, to present the new Speaker to him.

The governor thanked them for the honour of coming to present the new speaker to him. He said it was a good thing that they were able to conduct themselves in a civil manner and immediately elected a new speaker, to fill the gap created by the resignation of the former Speaker.

He promised to continue his support for the Assembly, as he will continue to do his best to provide the necessary facilities to make their work easier.

In his speech, the newly elected speaker, Hon. Emeka Nduka appreciated his colleagues for the confidence reposed in him.

He said the harmonious relationship between the executive and legislative arm will remain sacrosanct, while begging the governor to, wholeheartedly accept him as the Speaker of the Assembly, adding that the entire members of the Assembly have special love for the governor , same love they have extended to him (the new Speaker).

He promising never to let them down, but leave up to their expectations and that of the generality of Imolites.

He said sequel to the insistence of members of the House that an immediate election should be conducted to elect a new speaker, he abridged the plenary session for an election which saw the emergence of Emeka Nduka, representing Ehime Mbano State constituency as the new Speaker, unopposed.

Some of the Assembly members who spoke, Hon Eddie Obinna (for Majority Caucus) and Hon. Solomon Anukam (for Minority Caucus), thanked the governor for rebuilding the House of Assembly complex.

They described the new Speaker as a humane and learned gentleman who will lead the 9th Assembly effectively well, promising to give him the needed support to succeed.