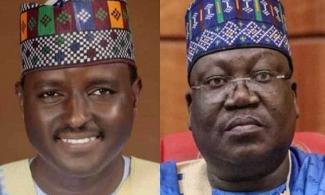 The Court of Appeal in Abuja has upheld the senatorial candidacy of the ruling All Progressives Congress candidate for Yobe North, Bashir Sheriff Machina.

The Appeal Court in a unanimous judgment affirmed the earlier decision of the Federal High Court, Damaturu which declared Machina as the rightful senatorial candidate of APC for Yobe North.

The court dismissed the petition filed by the ruling party for being unmeritorious and awarded N1 million to Machina.

President of the Court, Justice Monica Dongban-Mensem who delivered the judgement held that the lower court was right when it validated the May 28th APC senatorial primary election that produced Machina because it was duly monitored by INEC.

In June, a Federal High Court in Damaturu, Yobe State had declared Machina as the party’s senatorial candidate for Yobe North having emerged from a valid primary election that was conducted on May 28, 2022.

Though Lawan initially accepted the verdict and made public his decision not to appeal the judgement, he, however, made a U-turn and secretly sponsored an appeal at the Court of Appeal, Abuja.

Lawan, the APC National Chairman, Abdullahi Adamu and some key officials of the presidency were working round the clock to upturn the decision of the lower court using President Muhammadu Buhari’s name to intimidate the Justices of the panel.

SaharaReporters exclusively gathered that the job of influencing the Appeal Court Justices was being coordinated by the governor of Kebbi State, Atiku Bagudu and one Usman Musale.

“Lawan has also been putting intense pressure on Mai Mala Buni, Yobe State Governor to reach out to his Plateau State counterpart, Simon Lalong who played a vital role in the emergence of Monica as President of the Court of Appeal,” a top source had revealed.

It was also gathered that Lawan had asked the Chairman of the Senate Committee on Judiciary, Opeyemi Bamidele to undermine the budget of the Judiciary should the Justices refuse to do his bidding.

However, Machina was asked to step down for Lawan but he insisted that he would not withdraw for the Senate President.

Amid the controversy, the APC submitted the Senate President’s name to INEC as its senatorial candidate for Yobe North.

Miffed by the development, Machina headed to court to seek redress. Specifically, Machina in his suit asked the court to declare him as the validly elected senatorial candidate of the APC for the 2023 election.

Consequently, the trial judge ordered the APC to forward the name of Machina to INEC as the authentic winner of the primary held in May.