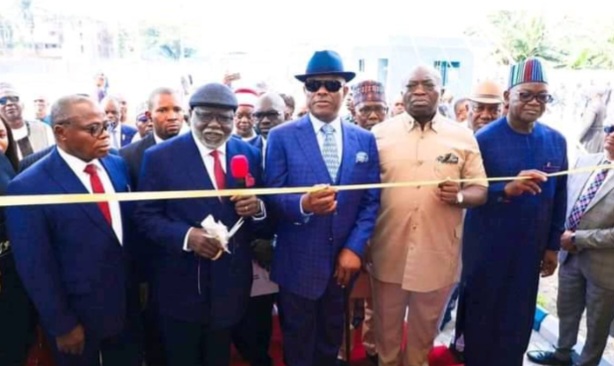 When Justice Tajudeen Olukayode Ariwoola was appointed Chief Justice of Nigeria, I was excited about two reasons. One, he comes from Oke-Ogun, a part of Oyo State, nay western Nigeria, that is perpetually located on the political and symbolic margins of Nigeria’s Yoruba world.

My enduring passion for the dispensation of representational justice to all groups in Nigeria conduced to my feeling of joy. That someone from Iseyin, a sleepy mid-sized town in what is arguably Yorubaland’s backwater, became CJN not because of where he comes from but on merit has a significance that most Nigerians don’t and can’t appreciate. The sense of communal fulfilment that his appointment has inspired in Oke-Ogun has been nothing short of phenomenal.

Two, after I familiarized myself with his professional trajectory, I came away with the distinct impression that he understood the weight, solemnity, and impartiality that his responsibility as CJN requires. I thought he would be a comforting departure from his predecessor who was suddenly and deliberately promoted to his position only as a strategy to give a legal imprimatur to Buhari’s planned electoral fraud in 2019—after the illegal removal Walter Onnoghen because he was suspected by influence peddlers in Buhari’s Aso Rock to be sympathetic to PDP.

But it is now emerging that Justice Ariwoola may just be as partisan, as compromised, as purchasable, and as clueless as his predecessor—if not more so. On Friday, newspapers reported Justice Ariwoola to have attended a ceremonial dinner party organized for him on Thursday by Rivers State governor Nyesom Wike—of course, with Wike’s four duteous gubernatorial courtiers in tow—after commissioning projects Wike completed in Port Harcourt.

During the dinner, the CJN needlessly thrust himself in the murkiness of political partisanship when he openly identified with Wike’s ongoing gladiatorial political combat with PDP presidential candidate Atiku Abubakar and PDP chairman Iyiorcha Ayu. He said he was happy that Seyi Makinde, the governor of his state, was part of the PDP governors who are revolting against their party’s presidential candidate.

“That is why we should not be scared to have these men of the integrity group,” he said after eating his fill of Wike’s dinner goodies. “And I am happy that my own governor is among them because he would try to imitate his friend and in-law because we came here to marry for my governor. So, Governor Wike will always threaten that he will call back his sister if my governor fails to play ball. That is why you see him following His Excellency because my governor is afraid of his wife being recalled.”

He obviously said that in jest, but as English poet Geoffrey Chaucer pointed out in The Cook’s Tale in 1390, many a true word is spoken in jest. In other words, people often betray their true thoughts and perspectives on issues in humorous remarks. Humor vitiates the directness and hurt of some uncomfortable truths.

The CJN deployed the cover of humor to insert himself into the partisan disputes of a major political party whose litigations he might be required to adjudicate in the coming weeks and months. How can the other people he doesn’t support expect justice from him?

Well, as if to make it clear that his partisanship isn’t unintentional, after his partisan postprandial humor, he descended into cheap, vulgar, undignified, and saccharine extolments of Wike’s putative accomplishments in ways that would shame professional griots.

“The things that [Wike] is bestowing to generations unborn will be hard to beat,” he said. “That’s why he says it all. Anytime he has the opportunity, he will say. Yes, he would not be in office forever, but whatever time he has to spend in office, let it be spent very well.”

The CJN, who is constitutionally required to transcend petty political partisanships, was just getting started in his disgraceful and embarrassing hagiographic adoration of Wike. He continued: “I was telling somebody that [Wike] started far below from being council chairman, and the Lord saw in him a son worth raising. I have no doubt the sky is still the limit for Your Excellency. The whole world is seeing what you can do, seeing what you are doing, and wants it replicated. It has to be replicated.”

I honestly feel embarrassed on the CJN’s behalf. The man seems to have lost his calling. It’s evident that he would do better as a praise singer who extols the virtues of rich crooks than as a judge who is required to dispense justice to all parties who come to him.

The sorts of mortifyingly cloying praises that Justice Ariwoola heaped on Wike in Port Harcourt on Thursday usually come from people who are financially compromised, who are dazed by the enormous financial inducement that they received from the object of verbal worship, and who are going out of their way to justify the financial investment in them. He spoke like the piper whose tune was called by the person who paid for it.

Before I am misunderstood, I am not, by any means, suggesting that the CJN was financially induced by Wike. I’d hope that he has good enough ethical consciousness to resist that. But I can’t help but point out that there is an eerie parallel between his mawkish utterances and the maudlin utterances of paid praise singers, and that’s unmentionably horrible for a CJN.

Maybe it’s because I haven’t paid enough attention, but I had never seen a CJN who ever threw his dignity in such tatters before a partisan political crowd as Justice Ariwoola did in Port Harcourt. It’s bad enough that he attended a partisan political event during an election season; he made it worse by leaving no one in doubt that he doesn’t even pretend to be aboveboard.

A Chief Justice who doesn’t have enough moral compunction and ethical restraint to know that he shouldn’t attend a partisan political event during a campaign season— and should guard against being seen as supporting a partisan political cause— can’t be trusted to be impartial to people who are not in his good graces. He denudes himself of even the pretense to impartiality, and that’s a shame.

This isn’t about Atiku Abubakar or Iyiorcha Ayu. It is about the integrity and independence of Nigeria’s judiciary. If the CJN can profess open support for a partisan group and its cause because a governor who is notorious for inducing people with money to buy their loyalty invited him to commission a project and fed him lavishly thereafter, anyone can get him to do their bidding.

I have no confidence in a CJN who is as deficient in self-worth as Justice Ariwoola.