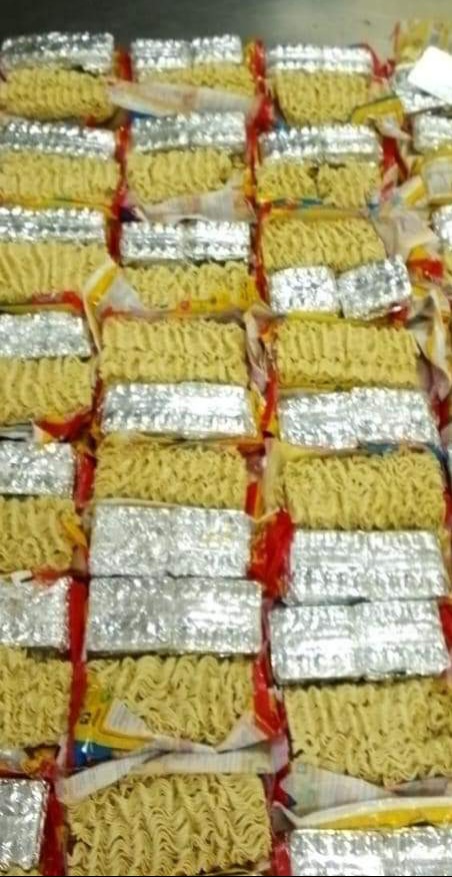 At least, One Million Seven Hundred Sixty Thousand Four Hundred Sixty (1,760,460) pills of Tramadol and other opioids have been intercepted hidden in indomie noodles packs and others at the Murtala Muhammed International Airport, MMIA, Ikeja Lagos as well as in Gombe state.

While over 600,000 pills of Tramadol 225mg coming from Karachi, Pakistan in two separate shipments on Ethiopian Airlines flights were intercepted by operatives of the National Drug Law Enforcement Agency, NDLEA at the SAHCO import shed of the Lagos airport on Monday 12th and Tuesday 13th December; 5,960 pills of Rohypnol concealed in 60 packs of indomie noodles going to Johannesburg, South Africa were also seized at the SAHCO export shed of the airport on Wednesday 14th December. A female freight agent, Olaleye Adeola has already been arrested in connection with the noodles consignment.

In a related development, a trader at Balogun market in Lagos Island, Akunne Chibuzor Tochukwu was on Tuesday 13th Dec arrested in collaboration with the Zone 2 Police Headquarters, Lagos over his attempt to export a Tramadol consignment to Dubai, UAE. The consignment was seized at the Lagos airport by NDLEA operatives on 25th November while a market labourer, Oke Abosede Ronke whose services were requested to convey the drug for export had earlier been arrested.

Meanwhile, NDLEA operatives in Lagos on Sunday 11th December intercepted a truck and a bus conveying 113 jumbo bags of cannabis sativa weighing 4,802.84 kilograms around the VGC estate area of Ajah while three suspects: Taofeek Yusuf; Ifeanyi Okorie and Israel Nwachukwu were arrested in connection with the seizures.
In Gombe state, a total of 1,154,500 pills of Tramadol, Rohypnol and Exol being transported from Onitsha, Anambra state to Gombe by a truck driver, Umar Hassan, 28, were seized on Thursday 15th Dec. at Bye pass area of Gombe by a team of NDLEA officers following credible intelligence.

Also acting on intelligence, operatives in Edo state on Friday 16th Dec intercepted a Honda Ridgeline pick-up vehicle with Reg No BWR 699 CV loaded with 29 bags of Cannabis Sativa weighing 319kgs. The driver of the vehicle, Alfred Vratombo, 32, was arrested with fake police uniforms, which he was using to deceive security men on the road.

Attempt by a drug dealer, Chucks Kalu, 29, to smuggle into Kano 26kgs of cannabis concealed inside packs of blenders was thwarted by operatives who intercepted the consignment along Abuja-Kaduna express road and later arrested him in a follow up operation in Kano, just as another suspect, Rabilu Sa’ad Abubakar,42, was also arrested in a follow up operation in Kano, following the seizure of his consignment 1,980 bottles of Cough syrup with codeine, concealed inside cartons, were seized along Abuja-Kaduna express road.

In Bauchi state, operatives on Saturday 17th Dec arrested Muhammed Ahmed, 40, with 288 blocks of cannabis sativa weighing 244.5Kg in Darazo area of the state, while in Delta state, NDLEA officers stormed the home of a drug kingpin, Okrika Kingsley Ozioma, at Usiefurum town, Ughelli South LGA, where an underground drug bunk was uncovered in a three-bedroom bungalow building owned by the suspect who is now on the run. 17.6kgs of C/S were recovered from the bunk in addition to a 2003 Silver Golf car with registration number Lagos KJA 572 AZ used for the distribution of drugs within and outside Warri.

In Oyo state, a suspect, Yusuf Ayinde, 40, was arrested with 50.4kgs Cannabis in his residence at Idi-Ose via Amuloko, Ona-Ara LGA, on Saturday 17th Dec.
While commending the officers and men of the MMIA, Lagos, Gombe, Edo, Delta, Kaduna and Oyo state commands for their commitment and vigilance leading to the arrests and seizures of the past week, Chairman/Chief Executive of NDLEA, Brig. Gen. Mohamed Buba Marwa (Retd) CON, OFR urged them and their compatriots across other formations to continue to surpass their past records of achievements.