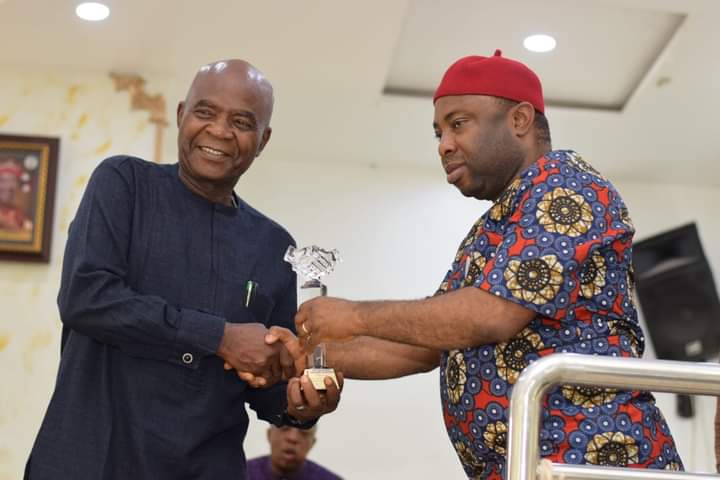 The Deputy Governor of Abia State, Sir Ude Okochukwu has commended the Abia Online Media Practitioners Association of Nigeria (OMPAN), Umuahia for sensitizing and educating the public through their reportage.

Sir Okochukwu who was represented by his Chief Press Secretary Chief Obasi Onwukah made this point at the conferment of the Best Deputy Governor Award by the OMPAN at its Annual General Meeting held at the Michael Okpara Auditorium Umuahia on Saturday reiterating his commitment to journalism and unwavering loyalty to service.

He made it clear that the award will challenge him to do more and promised continued partnership with OMPAN.

Similarly, the wife of the Governor,  Dr. Mrs. Nkechi Ikpeazu also received the Best Humanitarian Service Award from the OMPAN for her selfless service to indigent widows and less privileged in society.

Ably represented by her Chief Press Secretary Chika Ojiegbe appreciated members of OMPAN and promised not to relent in her service to the needy through her foundation Vicar Hope Foundation.

Furthermore,  the Senator representing Abia Central Senatorial District, Chief Theodore Orji who spoke through his representative Sir Frank Ibeh thanked the members of OMPAN for the award of Lifetime Achiever and Best Lawmaker stating that he was humbled and stated that he will continue to sustain his contributions to the nation building.

While receiving their awards,  the chairman of Abia Warriors Pastor Emeka Inyama, and the immediate Past Chairman of Umunneochi Local Government, Chief Ifeanyi Madu as the Best Sports Administrator and Best Local Government Chairman of the year respectively vowed to sustain the tempo in their work and different endeavors.

Appreciating OMPAN for effective information,  the Chairman of the occasion Mr. Chinenye Nwogu advised the association to always verify the information before dissemination and called on balanced reportage in their work.

Thanking the guests, the Chairman of OMPAN Mr. Paddy Anyatonwu, and the Chairman Planning Committee Mrs. Chinwe Ugele stated that organizing the event gave them the privilege to honour personalities who have distinguished themselves in their careers.