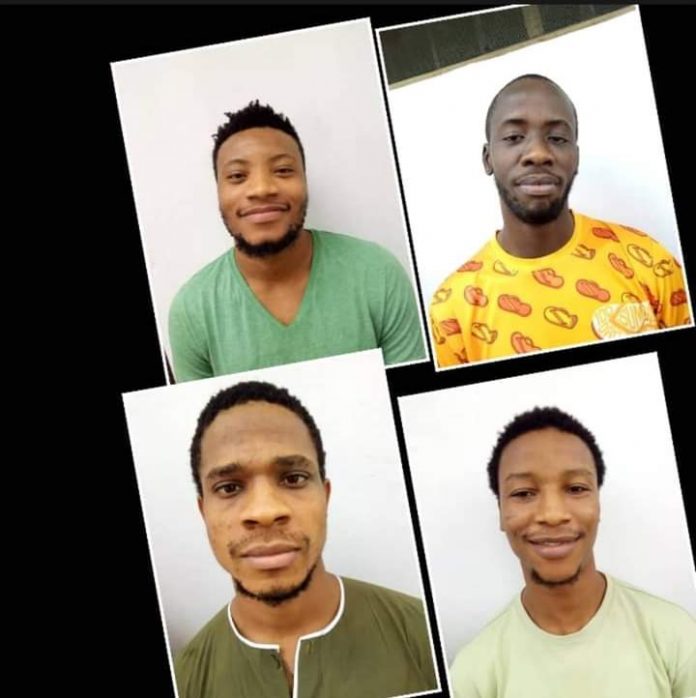 In view of their pleas, the prosecution counsel, Segun R. Akinrinlade urged the court to convict them by the plea bargain agreement among the parties. The defence counsel, C.O.Bassey and Innocent Eze pleaded with the court for leniency.

After listening to the Counsel, the judge convicted and sentenced the defendants as follows:

Enegi Emmanuel was sentenced to three months imprisonment for using a fictitious email (mainerchick19976@gmail.com) to register for the American Paycheck Protection (PPP) loan, a benefit meant for US citizens, and used same to defraud unsuspecting citizens of their hard earned money. He was however given an option of fine of One Hundred Thousand Naira (N100, 000.00) to be paid into the Federal Government’s account and community service at the Federal High Court and Ministry of Social Welfare Calabar, for a period of one month which must be supervised by the court and the EFCC.

While Adie Stephen was sentenced to six months imprisonment for fraudulently impersonating one Laura Vazquez, an American citizen, and Dave Daley, the court ordered that the items recovered from him which include a black Toyota Corolla car 2009 model (still unregistered), IPhone 7 and IPhone XS mobile phones, be auctioned and the proceeds paid into the Federal Government’s account.

Nwandike Kelechi was sentenced to six months imprisonment with an option of Three Hundred Thousand (N300, 000.00) fine and one month community service. The court also ordered that the convict forfeits the following items to the Federal Government- iPhone 11 Pro Max and HP Intel(R) Core laptop.

After sentencing the convicts, Justice Ojukwu further ordered that they be remanded at the Correctional Service facility in Calabar until they have paid the various fines pronounced by the court.

The convicts were arrested by operatives of the Uyo zonal office of the Commission in a sting operation on May 18, 2021.