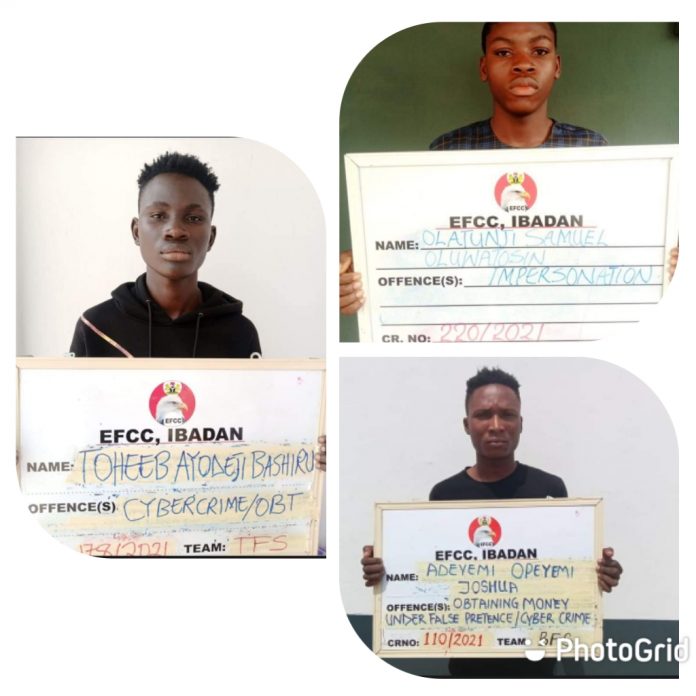 The Ibadan Zonal Office of the Economic and Financial Crimes Commission, EFCC, has secured the conviction and sentencing of four internet fraudsters in Ibadan, Oyo State.

They were arraigned on Friday June 25, 2021 before Justice Uche Agomoh of the Federal High Court sitting in Ibadan, on separate one count charge for offences bordering on fraudulent impersonation contrary to Section 22 (2) (a) and 22 (2) (b) of the Cybercrimes (Prohibition, Prevention, Etc) Act, 2015, and punishable under Section 22 (2 ) (iv) of the same Act.

They pleaded “guilty” to the charges.

Consequently, the prosecuting counsel, Mabas Mabur, reviewed the facts of the case, and tendered in evidence the statements of the defendants and documents implicating them, which were admitted in evidence.

He, therefore, urged the Court to convict them accordingly.

Justice Agomoh convicted Adeyemi as charged and sentenced him to six months imprisonment; Ugwu, Olatunji and Ayodeji were convicted and sentenced to four months imprisonment each.
The judge also ordered Bashiru to restitute $650 (Six Hundred and Fifty United States Dollars to victim of his fraud, and forfeit one Samsung S8 Duos Mobile phone and an IPhone X to the Federal Government.

Adeyemi is to restitute his victim of the sum of $500 (Five Hundred United States Dollars) and forfeit one iPhone 6.

Ugwu was ordered to restitute the sum of $1,000 (One Thousand United States Dollars) to his victim, one Theresa Morales through the EFCC and forfeit one iPhone 7 Plus mobile phone and one grey-coloured iPhone 6 mobile phone to the Federal Government; while