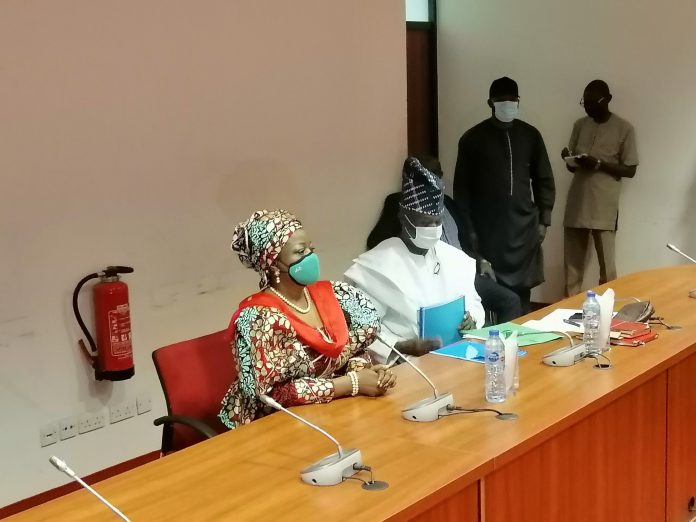 The Senate Committee members screened Lauretta Onochie, a staunch supporter of the All Progressive Congress, APC, following her nomination as a Commissioner for the Independent National Electoral Commission, INEC, by President Muhammadu Buhari.

The Senate raised the issue of partisanship following verifiable documents that shows that Mrs Onochie is a staunch supporter and card bearing member of the leading party in the country.

The nomination of Onochie generated lots of debate from the Committee members who are argued if Onochie was a member of the APC or a lover of the Buhari-led administration.

However, the Section 14(2a) of the third schedule of the 1999 Constitution as amended stated that “a member of the commission shall be non-partisan and a person of unquestionable integrity.”

And Section 14(3b) of the same Schedule states that “there shall be for each state of the federation and the Federal Capital Territory of Abuja, a Resident Electoral Commissioner who shall be a person of unquestionable integrity and shall not be a member of any political party.”

Citing this, Senator Ike Ekweremadu encouraged Onochie to emulate former Finance Minister Kemi Adeosun and reject the nomination to protect the integrity of the President. “I am aware that you are political appointee of the President and you do everything to support him. I am also worried about the concerns of Civil Society Organisations and International Community on your nomination as INEC Commissioner.”

“In the 1st July, you wrote a letter to Chairman of @NGRSenate Committee on INEC, Senator Kabiru Gaya and you said in paragraph five that “a register was opened and we all put our name as members of Buhari support organization.”

However, Senator Yahaya Lawal Gumau, a two time house member representing Toro Constituency in Bauchi State insisted that all allegations against Lauretta Onochie are based on sentiments.

In defence, Onochie disclosed that he has distanced herself from politics since 2019 and do not have anything to do with any political party in the country.

“Since Buhari was elected as President for the 2nd term, I have removed myself from everything politics. Since 2019, I don’t have anything to do with politics. As I am sitting down here, I am not a member of any political party in this country.”

“With regards to federal character, Lauretta Onochie said, INEC commissioner (purportedly from Delta state) Ms Agbamuche is representing Cross-Rivers state because she married someone from the state and so she is not representing Delta state.”

Defending Onochie, the Senator representing Ekiti Central Senatorial District, Opeyemi Bamidele reminded the House that the current INEC Chairman Prof Yakubu Mahmoud had worked with President Buhari before his appointment as INEC Chairman and the allegation on Onochie should not be counted.

Meanwhile, Senator representing Plateau North Senatorial District, Istifanus Gyang brought a court affidavit where Lauretta Onochie swore she is involved in politics and a member of the All Progressive Congress.

Onochie, again, countered the argument saying she has not been involved in politics since 2019 despite tweeting in support of President Muhammadu Buhari. She admitted she worked with the President.

“I swore an affidavit saying I’m involved in politics and a member of APC when I just returned to the country – Lauretta Onochie insisting she is currently not a member of any political party.”

The Committee members argued that Onochie should be placed on oath over her partisanship but Senator Ekweremadu insisted that placing a nominee on oath was not part of the guidelines on screening a nominee.

The Committee members also debated whether Onochie was capable of being neutral which ended up dividing the Committee.