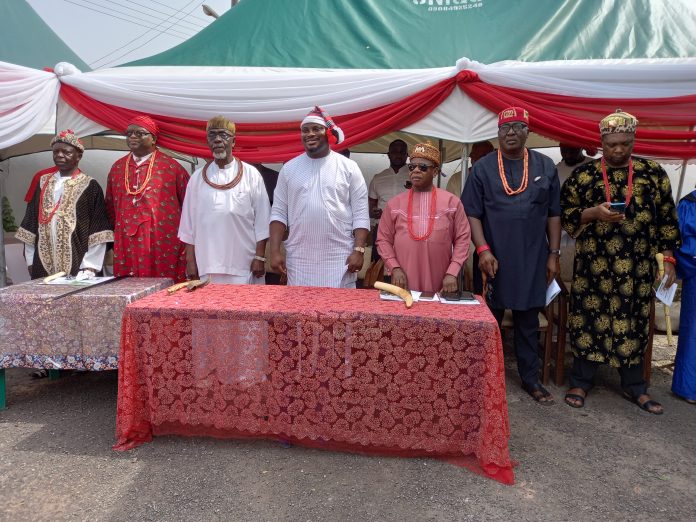 At the first graduation ceremony of the Rural Youth and Women Development Programme Through Agriculture in Conjunction with Lehae Farms limited, the first beneficiaries of the Don Lulu Foundation, the trainer Dr Emmanuel Mgbekwute revealed that the training which started this year has its oldest student at 70 years and its youngest at 18 years.

According to Dr Mgbekwute, the school which has about 600 students who registered succeeded in covering its schedule in agricultural training which was made available by the Peace Ambassador of the United Nation and the convener of Don Lulu Foundation, Mayor Lucky Igbokwe.

The adage ‘dont give me fish but teach me how to fish’ was exemplified in the coordination and training of the villagers in the rearing and production of agricultural products with the help of the King of Ezeoba, Oba Iheanyichukwu Nwokenna.

Speaking at the event, Mayor Lucky Igbokwe stated that the poverty rate in the country prompted into thinking of ways to alleviate it and help the people fend for themselves.

‘This is a little idea that has blossomed into what we are seeing today. According to the data we have in Nigeria, 60 per cent are in perpetual poverty. This is a sad situation. Our people are hardworking so what is keeping my people from being great? I thought about it and found out that empowerment can go a long way in bettering the lives of my people.

I found out that agriculture will enrich the lives of people and provide the people with handiwork. We provided 60 participants in training and setting up their farms. With this, our people will become major suppliers and distributors of agricultural products.

I sincerely thank the Oba for the free donation of land, I thank the facilitators. Don Lulu’s Foundation is of humanity and we must continue to educate and equip our people with what is needed to make our dreams a reality.’

Eze Nwokenna thanked the people who graced the event revealing that he was the first pro-chancellor of the University/foundation while stating that he, also, graduated from the School.

‘I want to thank my son and friend, Mayor Igbokwe for having the mind to equip the people. You stated, in your speech, that you weren’t doing this for fame but you saw the level of poverty that your people were in and decided to step in and help.

I want to thank the graduands for always coming for the training. The Mayor has paid 45 per cent of the total amount to start-up in equipping the people. There are a lot of people that will be moved to do this with what has been accomplished today. The Mayor never mentioned he wanted to contest for any election but to better the lives of his people. But it will be in your goodwill to support him if he decides tomorrow to contest for any election. The Mayor also mentioned that this process will continue in two senatorial districts, the Abia North and South,’ he concluded.