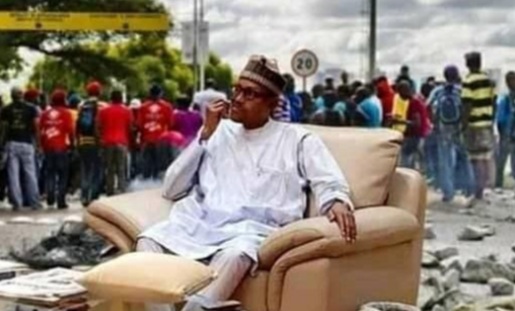 News from Nigeria these past few weeks read like an implausibly dystopian fictional plot written by an inept author. Events of the last few days particularly feel like a series of unstable and disordered parades of terrifying mental images and emotions that might seem perfectly logical during the subconscious moments of sleep but that strike one as completely illogical in self-conscious wakefulness.

I’d initially dismissed several news stories I’d read as fake because of their improbability in the normal order of things, but all of them have turned out to be factual.

Take, for example, the exclusive story by TheCable that the money the Buhari regime spent on petrol “subsidy” in 6 months exceeded the revenue it got from crude oil sale by up to N210 billion! Or that, for the first time in a long while, Nigeria now spends more to service its debts than the revenue it receives.

Then over the week, it emerged that the Buhari regime has squandered Nigeria’s excess crude account at a rate we had never experienced since independence. He inherited $2.1 billion in 2015; what’s left now is a mere $376,655.

How is that level of eye-watering squandermania even conceivable? Just as I was about to recover from the shock of this bit of distressing news, Finance Minister Zainab Ahmed was quoted to have said the money was used “to enhance security.” Security?

The same security that is the scarcest commodity in the country? So, Buhari spent more than $2 billion to lose security while “enhancing” it? In what universe does that even remotely make any sense?

Nigeria is at its most insecure state since the end of the Civil War in 1970. Even Abuja, the previously secure seat of power, is turning out to be the epicenter of direfully immobilizing insecurity.

It’s now so insecure that days after terrorists bragged that that they would abduct Buhari, three Presidential Guard Brigades were shot and killed by the same terrorists who had attacked Buhari’s convoyed unchallenged in Katsina weeks earlier; private universities have closed; the federal government and nearby Nasarawa State government have instructed primary and secondary schools to close; a traveler recorded a viral video of a “troop of deadly looking men on over 30 motorbikes carrying automatic rifles entering Abuja from Kogi axis”; and fierce fighting was reported at Zuma Rock between terrorists and the military on Thursday.

Even ECOWAS sent a memo to its staff in Abuja on July 27 to warn them of the increasing precarity of life in the Federal Capital Territory.

“Intelligence reports warn of plans by undesirable elements to infiltrate various parts of the country, particularly state capitals, including the Federal Capital Territory, with the view to perpetrate crimes such as abductions and kidnappings for ransom, or as means of getting recruits for terrorist activities,” the Peoples Gazette quoted an ECOWAS memo to have said.

And reports say Abuja is now becoming a gaunt, depressed, and desolate city because people are increasingly deserting it over the progressively broadening and deepening insecurity there.

Recall that on July 5 terrorists attacked Kuje Prison in Abuja, which Deputy Speaker of the House of Representatives, Ahmed Idris Wase, said occurred in spite of 44 State Security Service reports to security agencies in Abuja warning of the impendence of the attack.

We also learned that no less a person than the National Security Adviser to Buhari confessed on Thursday that “People are getting tired [of the growing insecurity in the country] and are beginning to gravitate to other means of self-help.”

But a citizen journalist and lawyer with no military intelligence training by the name of Yusuf Anka who didn’t partake in the looting of $2.1 billion “to enhance security” in the country bravely and dexterously combed the hideouts of bandits in Zamfara, located the bandits, talked with them, and shared his findings through the BBC African Eye news show.

You would think the government would be contrite and shamefaced. No, they conveniently used former BBC journalist Kadaria Ahmed’s flawed and professionally impoverished article against the BBC as a crutch to threaten sanctions against both the BBC and the Daily Trust for lending some light to the blight of terroristic banditry in Zamfara.

The government hates the unflattering images it sees in the mirrors that the BBC and the Daily Trust have become in bringing to light the plight of everyday folks in Zamfara and elsewhere, so it wants to break the mirrors instead of doing something about the ugly images the mirrors reflect.

(It reminds me of incompetent CBN governor Godwin Emefiele’s threat to AbokiFx owner Oniwinde Adedotun to “come out, let’s fight” because Emefiele said the naira was losing ground against the US dollar and the British pound on account of the AbokiFx website’s publication of daily exchange rates that reflected the perilous state of the naira!) Clueless nitwits!

The revelations in the BBC and Daily Trust reports that the government is getting bent out of shape over were not even that earth-shattering. We all know terrorists are untouchable overlords that are sheltered by people in government.

For example, an ill-famed bandit by the name of Ado Aleru who has openly confessed to murdering people (he told BBC African Eye, “My men do [the kidnapping]; I just go and kill them”] and about whom a wanted notice was issued by the police in Katsina for killing 52 people in Kadisau, Katsina State, in 2019 was knighted as “Sarkin Fulani” by the Yandoto Emirate of Zamfara at a public ceremony.

The police in Zamfara didn’t arrest him, and the same federal government that invested resources and intelligence to extradite Nnamdi Kanu from east Africa has shown no interest in arresting the bandit. And, although there’s an extant N5 million bounty on Aleru, he walks freely, grants media interviews, and dares the government.

There is also the case of another savage bandit by the name of Ibrahim Umar who was arrested in May 2019 after leading a syndicate of kidnappers to terrorize the Abuja-Kaduna highway. In a widely shared video of his interrogation by one DSP Hussaini Gimba, the bandit confessed to drinking the blood of people he murdered.

“I can recall killing about 10 people,” he told DSP Gimba in Hausa in the 2019 video. “Usually, we set abductees free when they paid. Those who didn’t pay were killed. After my first killing, my friend who is an officer asked if I drank the blood of people I killed. I didn’t, so he advised me to always drink the blood of anyone I kill to avoid going insane. My spiritual malam also said the same thing: that I should always lick the blood of people I kill. That was exactly what I did from then on.”

Well, the public record after this confession was that Ibrahim Umar had been kept in detention pending trial. But on July 26, when the military demobilized and arrested a mob of kidnappers who blocked the Katsina-Jibia road, the same Ibrahim Umar who was supposed to be in detention was among the people the military arrested!

As if that’s not absurd enough, we learned from Governor Nasir El-Rufai that Buhari, the country’s chief security officer, didn’t even know that bandits had threatened to kidnap him.

El-Rufai said, “This is why I met with the president on Sunday and told him about these problems. I also told him about the video because up to that day he was not even aware. I told him and the following day Zamfara state governor, Bello Matawalle, also confirmed to him that he saw the video too so as to take action.”

Everyone in Nigeria knows bandits threatened to kidnap Buhari and El-Rufai (I truly hope they do because that may be what we need to solve this problem), but the man who supposedly gets daily security briefings from all Nigerian security agencies didn’t know this.

Even with the wildest stretch of dystopian fantasy, I can’t conceive of anything more off-the-wall than that. A director reading a dystopian horror movie script with this kind of plot line would edit this portion for its sterile improbability.

Why would the president of a country who supposedly gets periodic security updates from all security agencies not know that terrorists publicly vowed to abduct him? Isn’t self-preservation the first law of nature?

You have to wonder what exactly Buhari does as a “president” if he isn’t even sentient enough to be aware of immediate threats to his own life. No wonder a wildly popular Nigerian social media meme says Buhari is the only person who minds his own business in Nigeria because all he does is sleep, wake up, eat, excrete, travel, and ensconce himself in the blissful ignorance that the Presidential Villa bubble generates.

I think a fitting denouement to this ongoing real-life horror movie would be for Buhari to get kidnapped.