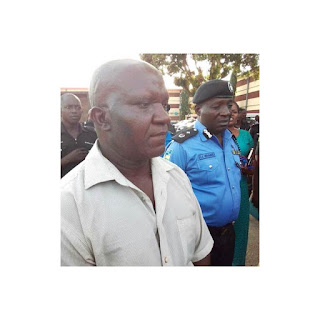 A-54-year- pastor, Udoh Okon, has been arrested by the Lagos State Police Command for allegedly raping a 9-year-old girl.


TheNation reports that Okon, the Pastor of Christ Abiding Church, Bankole Street, Famous Bus Stop, Shomolu, was arrested by the gender section of the command yesterday following a case of defilement filed by the victim’s mother, Peace Effiong.

According to Police Commissioner, Edgal, the woman reported that she noticed her daughter was acting strangely, adding that she checked the child on April 13, while she was sleeping and saw semen coming out of her private part.

Alarmed by the discovery, Edgal said the woman told detectives she woke her child up and questioned her, adding that the victim mentioned Okon as the man who has been raping her since last year.

He said: “The little girl went further to reveal that it was in the pastor’s wife’s shop at the aforementioned address that she was defiled. Medical examination showed that the victim’s hymen had been ruptured long ago, an indication that the suspect has been having carnal knowledge of her for a long time.

Investigation into this case is in progress.” The pastor denied the allegation, claiming that she only appealed to the victim’s mother not to punish her in public.

He said: “I and few people went to the woman’s shop and saw her daughter kneeling down with blocks on her hands and she was crying. I asked what happened and her mother said somebody told her that whenever the child came to the compound, someone used to make love to her.

Our shops are not far from each other. I begged the woman to forgive the child and that she should not punish her publicly anymore. She did not listen to me and so, I left them and went to my own shop. I am surprised they said I defiled her.

The child could be my granddaughter. There was a day she came to my shop and I asked her to assist me in carrying empty crates. I sell non-alcoholic beverages. She helped me carry the crates to my other shop and kept them outside. That was all.”