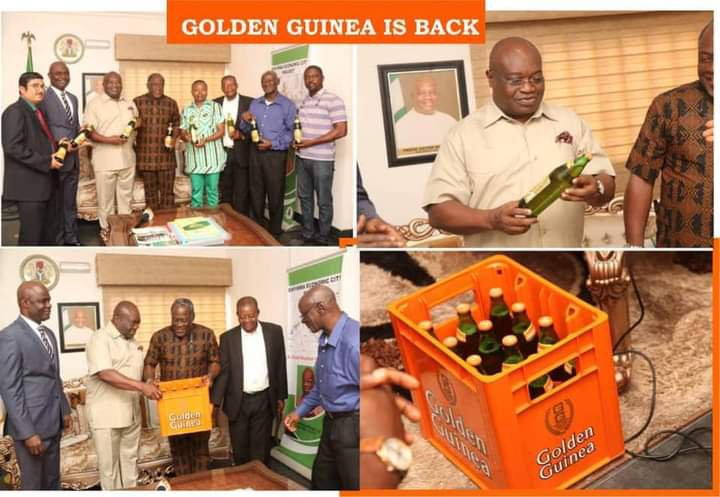 In 2015, the then-incoming Governor of Abia State, Dr Okezie Ikpeazu, identified industrialization as one of the pillars of his administration to create jobs, improve the economy and increasing internally generated revenue of the state.

To build this Pillar of Development, Dr Ikpeazu applied a 3-pronged strategy to deliver on industrialization:

This strategy has helped companies like Golden Guinea Breweries to return to production after decades of being closed. More than 1,000 direct and indirect jobs have been restored and created and our people are once again enjoying their favourite beverages.

When Governor Ikpeazu dispatched 30 young Abians to China to be trained on automated shoemaking, he intended to move the gargantuan shoe production business in Aba from manually operated to machine supported mass production. When the team returned, Governor Ikpeazu followed up by ensuring importation of the equipment they trained within China and thereafter established Abia’s first-ever automated shoemaking factory called Enyimba Automated Shoe Company (ENASCO) with the 30 young Abians becoming the drivers.

ENASCO is already mass-producing shoes for institutions like the Nigeria Railway Corporation and is set to also produce for the Nigeria Police and other military and paramilitary organizations in the country that hitherto imported their footwears at great cost to our forex.

Recently, Governor Ikpeazu flagged off the construction of Enyimba Automated Garment Factory to drive mass production of clothing and fashion apparels in the state. It will be recalled that early in his administration the Governor travelled to Turkey, Bangladesh and Thailand with some Aba tailors to expose them to automation driven mass production.

When Governor Ikpeazu deliberately moved to make the state friendly to foreign investors and travelled to global economic capitals to make the case for investment in Abia, many of his opponents laughed it off as “junketing”. Yet, the Governor was not deterred and went ahead to put in place security, good infrastructure and other enablers that would attract foreign investors to the state.

The efforts of the Governor are yielding dividends with the state rated as the 3rd favourite destination of choice for foreign investments in 2020 as rated by the National Bureau of Statistics (NBS), also with many new multi-national outfits opening shops in Aba after decades of avoiding or fleeing from the state.

Steel giants, Inner Galaxy are producing and exporting from Aba while Nibra Shoe of Brazil is actively constructing a new factory in the state. Other international brands are still investing in the state to tap into the wealth creation agenda of Dr Ikpeazu.

Recently, a man who was displaced from a northern state and forced to return to the southeast found himself in Aba. In no time, he was able to settle his family, rebuild his business and is in his own words “doing better” than before. Even the streets of Aba are bustling to the brim with many new businesses opening up almost daily thereby already putting pressure on available infrastructure. In response, however, Governor Ikpeazu has accelerated and given new impetus to his infrastructure development agenda under his popular “Kinetic Abia” program and recently vowed to double his record-setting 108 completed road projects in the state before the end of his tenure in 2023. He is creating new industrial clusters including at Ovum and Umukalika and working with Geometric Power Ltd to ensure the roll-out of a steady power supply in 9 of 17 LGAs of the state to support rapid industrialization.

These and much more are what is making Ikpeazu’s Abia thick!